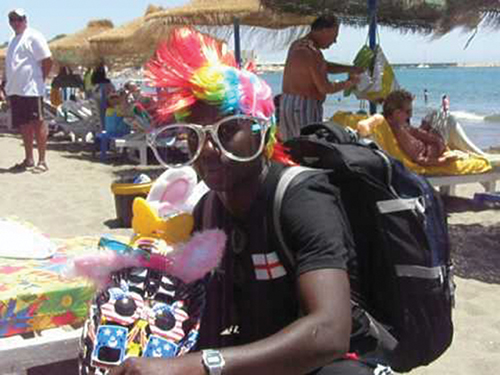 As we reported to Spain yesterday in regards the lookey lookey man who was violently attacked and robbed in Benalmadena, hundreds of messages came in wishing him well and the disgust of his treatment whilst a large benefactor comes to the rescue.

“Arthur”, as he went for a slight rest break took a turning up the side street by the Las Arenas hotel when he was jumped by a gang alledged from Barcelona who are currently operating crimes of theft across the Costa del Sol.

The gang of 3 smashed his head repeatedly against a wall until they knocked him unconscious before stealing all his cash takings and scarpering from the scene.

With the lookey lookey men easy targets for gangs as they feel they can’t go to the police to report crimes they are now being very more vigilant.

Although this morning we the Euro Weekly News caught up with ” Arthur” this morning as he was already back out to work out on the streets selling his products.

We took him to a local cafe and bought him a breakfast and a nice cup of tea, whilst he sported a nasty cut to his head and three missing front teeth.

” Arthur” told us ” It was very painful and I don’t really know what happened, it was so quick he said, I didn’t see it coming at all, before I knew it I was grabbed by the neck with my head being smashed into the hard wall, next thing I knew was my friend was stood over me holding a cloth to my head, my mouth is very sore and I lost three teeth, I think I must have been kicked in the mouth”

” They stole all money, it was about 420 euros but it’s not my money really it’s the bosses, I have never had problems like this before here in Spain” he said.

” I just work everyday 7 days a week to earn a living and live” he furthered.

” I was very lucky last night my friends and co workers who I live with looked after me, and bathed my wounds, they even offered to cover my sales this morning but I knew I had to get back out there to earn and rebuild my confidence”

” How lovely that really means a lot to me, I have so many friends across the sea fronts, many I see every year as they come on holiday and they call my name” he said

” I’m so thank you for you reading them to me, I can’t read in English really and I would never have seen them otherwise, it’s really warmed my heart that has”

” Can you please thank all your lovely people for those lovely messages I do really appreciate them, they mean so much and give me the will to carry on, I feel so blessed”

As “Arthur” was finishing his cup of tea a man walked over to our table and asked how he had cut his head and ” Arthur” told the tale of his attack yesterday and explained how he was robbed and had lost all his takings of 420 euros.

The man simply said ” wait there – don’t go”  and walked off, he returned some 5 minutes later and came back to the breakfast table we were sat at.

” Those sunglasses with the red stripe how much ?” he said with a wry smile on his face

The man pulled out a wad of 50 euro notes handed them over and said with a big smile ” Keep the change lad, get yourself sorted with your boss and some cream from the chemist for those wounds” and shook Arthurs hand and  saying” You are the characters of the Costa del Sol, you don’t need to be down on your luck, I’m fortunate I can help you”  and walked away.

The very generous benefactor had given ” Arthur” 500 euros.

” Arthur” broke out in tears and we had to console him, he wept saying ” I don’t believe this, the bosses would have been asking me to pay it all back, you don’t know what this means to me”

We asked the cafe owner Emma Coleman of Scoffers who the customer was, she said ” He comes in everyday, he’s a lovely lovely man, a retired banker, I knew what he was up to but he won’t want publicity that’s why he walked off”