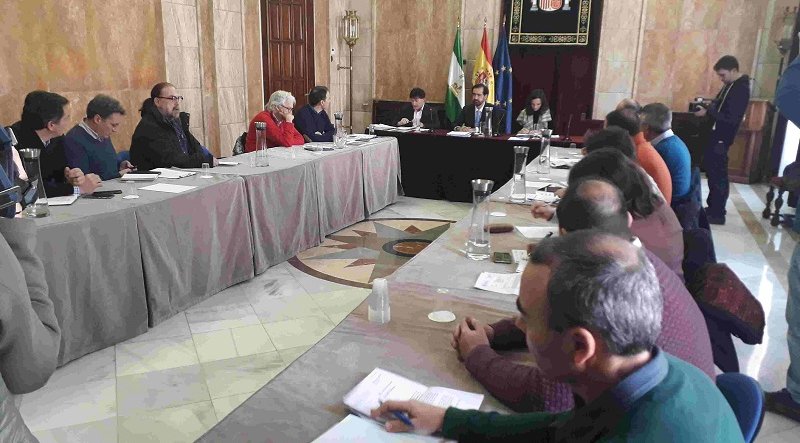 ROAD MAP: The aim is to establish what and when administrations have to do and how much it is going to cost. CREDIT: Subdelegacion del Gobierno en Almeria

A STRATEGY for protecting the provincial coastline from the impact of climate change and extreme weather events like last month’s Storm Gloria should be finalised by the beginning of next year, the Spanish Government Sub-delegate has told delegations from Almeria’s coastal municipalities.
Manuel de la Fuente met with the representatives of Adra, Roquetas de Mar, El Ejido, Enix, Mojacar, Vera, Cuevas del Almanzora, Pulpi, Balanegra, Almeria, Nijar, Carboneras and Garrucha councils, including the mayors, and key economic and social associations and entities on Friday to update them on the Ministry for Ecological Transition’s plans.
De la Fuente explained investigations financed by the European Union are being carried out to identify problems in order to address them in what a Sub-delegation statement described as a “comprehensive, economical and environmentally sustainable way.”
The project is taking into account physical, environmental and institutional factors related to the evolution of the coast, the risk of flooding, the occupation of public spaces, erosion and alterations to climate patterns.
Once the strategy has been completed, the risk protection measures adopted will be of “sufficient scientific soundness” that they will mark out a “road map” so that “current and future administrations” know “what they have to do, when they have to do it and how much it is going to cost”, the Sub-delegate maintained.
The work is being carried out by the Coastal & Marine Union (EUCC), the University of Cantabria’s IHCantabria Hydraulic Environmental Institute, the MedCities network of Mediterranean local authorities and a panel of international experts.
Earlier in the week the Secretary of State for the Environment Hugo Moran travelled to Seville to explain the general lines of diagnosis carried out over the first year of work on the strategy to institutional representatives of Almeria, as well as of Cadiz and Malaga provinces, and to establish the forms of collaboration.
The consultation sought to gather information on the perception of institutions and key agents on coast management problems and to discuss the best practices and lessons learnt from management measures already implemented.
Moran pointed to the damage wreaked by Storm Gloria on the Mediterranean coast as a reminder of the importance of “diagnosing, planning and acting with coordinated work between all the administrations and with all those who have something to say.”
Rising sea levels and the intensity of storms due to climate change mean that while coastal erosion cannot be completely controlled, efforts have to be made to address the problem, the Secretary of State stressed.