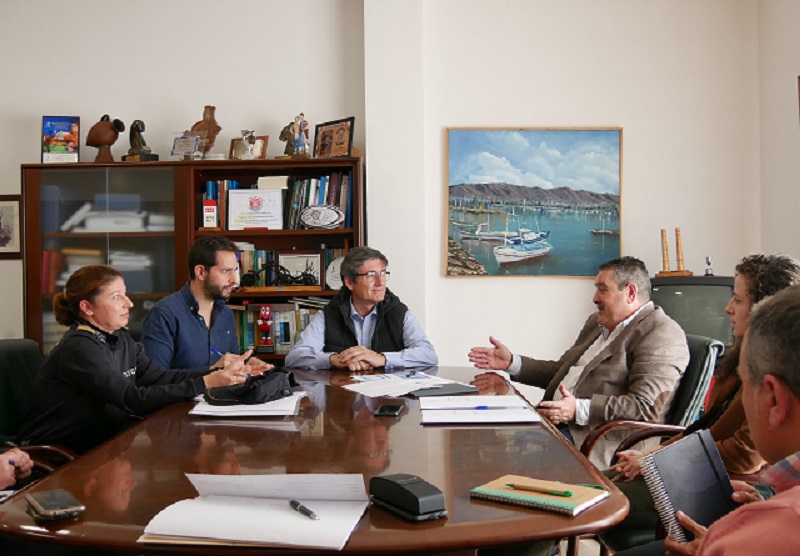 MESSAGE: The Mayor stressed the measure are not about raising the alarm, but are about prevention. CREDIT: Ayuntamiento de Adra

ADRA council has adopted a whole bunch of measures aimed at preventing the spread of the coronavirus in the municipality.
One of the first local authorities in Almeria to issue a notification about the steps it has decided to take, the move on Wednesday night followed a meeting between the Mayor Manuel Cortes, the Presidency and Health councillors Jose Crespo and Patricia Berenguel, Local Police, Civil Protection, Guardia Civil, municipal experts and the head of the Junta de Andalucia Health Service in Almeria Antonio Garrido.
This was followed by a working meeting with the municipality’s Council of Spokespersons with representatives of the Popular Party, Ciudadanos, PSOE and Plataforma por Adra political parties to reach a consensus on the preventative measures to be adopted.
In general terms, it was agreed to reduce municipal activity and postpone all events which could mean a large gathering of people. It was also agreed to hold the council plenary meeting at a later date.
As a result, the council decided to close all municipal public spaces for a fortnight. These include the swimming pool, senior citizens’ centres, the occupational centre and municipal libraries.
Activities at the cultural centre, Adra Museum and the Fishing Museum are being limited to avoid large crowds.
Municipal markets, workshops and sports schools have been suspended, although it was decided that sports facilities like the municipal pavillion and the Miramar stadium could remain open.
In addition, the council has established a restriction on visitors to the residence for the elderly.
At the same time, the local authority announced that in line with public health authority recommendations and with immediate effect it would be stepping up cleaning and disinfection measures at municipal facilities, including children’s playgrounds and bio-health zones.
The meeting also included providing information on cleaning and disinfection protocols in all Town Hall work and communal areas, on the installation of disinfectant gel dispensers and the sending out of informative circulars containing national Health Ministry and Andalucia government health department coronavirus preventative measures recommendations.
What’s more, the fingerprint recognition registry system for municipal staff has been removed until further notification.
The Mayor said the adoption of the measures was aimed at “protecting as much as possible all Adra residents from contagion.”
At the same time he issued a message of “calm”, commenting, “this is not about raising the alarm, but about adopting measures for prevention.”
Cortes urged residents to “practice the health recommendations” and appealed for “individual and collective responsibility”, pointing out “it is in our hands to take decisions like limiting social contacts to the strictly necessary and protecting more vulnerable groups like elderly people.
“Avoid social alarm, keep yourself informed and take the preventative measures which official sources advise”, he suggested.