We still want something to read 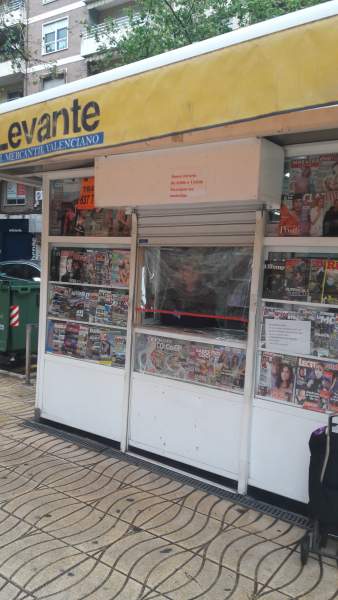 Kiosks continue to open, credit:  Mine

SPAIN is in lockdown and its self-isolating population has to comply with stringent measures.
Meanwhile there are mobile phones, iPads, laptops, the television and radio to follow the path of Covid-19 as it cuts a swathe through Spain, but people are turning to the newspapers too.
Along with supermarkets, pharmacies, estancos (licensed to sell and tobacco) and petrol stations, newspaper kiosks still have permission to open.
Newspaper sellers are there on the front line , providing the public with national and regional dailies as well as gossip magazines like Hola.
Like everybody else they are concerned about catching the highly-contagious virus, but still open up every morning and attend to the public, behind improvised screens, wearing gloves and masks.
“A lot of people come straight to us each day, looking for responsible information as an antidote to the fake news that circulates on the internet,” said Vicente, who runs a kiosk.
“There’s Facebook and WhatsApp groups and heaven knows what else, but how do you know if what they say is true?” he asked. “You’re just expected to take their word for it.”
A newspaper is different, Vicente claimed.  “Articles have a name on them or they come from a new agency: they have to give you chapter and verse if you ask for it.”
There has alos been a rise in books of crosswords, sudokus, word games and puzzles, according to Vicente: “One elderly gentleman asked if we had any colouring books to keep himself occupied.
But neither is there any panic-buying of newspapers. With cafes and shops closed he and others with kiosks are having a tough time of it although some newspapers and magazines have increased their commission by 2.5 per cent.
“But we’ll carry on for as long as they let us,” Vicente promised.