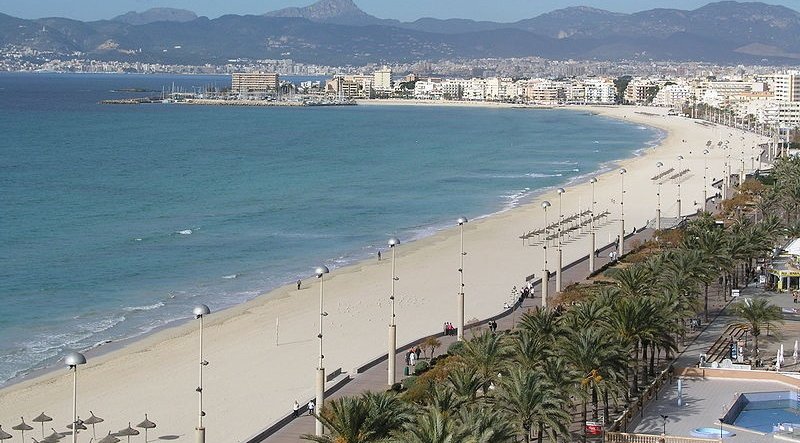 OBJECTIVE: The aim is to “save something of summer”, the Palma Tourism councillor said. CREDIT: ca.m.wikipedia.org Otto Buchegger Max Sorglos

MALLORCA capital Palma is aiming to woo UK ‘influencers’ to its beaches as a way of luring British tourists to the destination once the lockdown de-escalation gets underway and international travel is allowed once again.
The city council’s Fundacio Turisme 365 idea is part of a €300,000 promotional campaign, explained Palma Tourism councillor Elena Navarro.
Specific funding will go to financing the influencers’ trips to the island and those of national tour operators with a view to “saving something of summer,” Navarros said.
The planning for getting the tourism sector back up and running in Palma envisages a first phase of promotion before September, once travel gets the green light, and a second phase in the autumn and winter.
The first phase will focus particularly on the national market, with funding taken from budget allocations which it has not been possible to action due to the coronavirus crisis. The city council wants to launch “an image campaign and direct sales on all publicity platforms,” including an ad on national TV, the Tourism councillor revealed.
Navarro explained that Fundacio Turisme 365 is now working on getting up and running promotional initiatives with the media and virtual presentations given the impossibility of travelling right now.
Once lockdown restrictions on movement are lifted there will be “a press trip with British influencers,” Navarros said.
“We have not promoted summer travel for many years, and one of the main changes in that we will be promoting it from the first moment it’s possible to travel,” she commented.
In the autumn-winter season the focus will shift to the international market, depending on connections with Mallorca.
According to Navarros congress tourism will “probably be the last to recover.”
She said there were also plans to organise a trip for national agents, but this would probably be after September and in coordination with the Mallorca Convention Bureau and the Congress Palace.