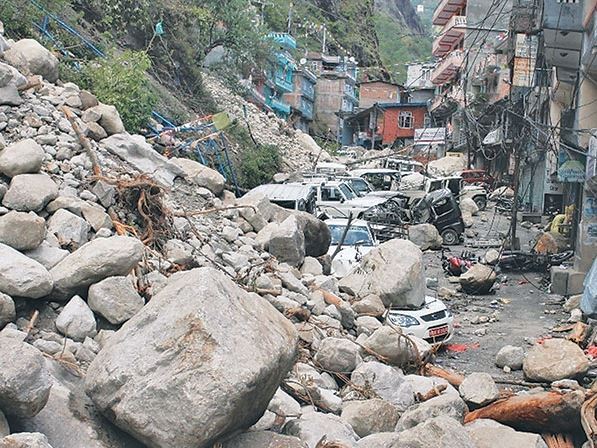 The last big tremor in the Himalayas was the Nepal earthquake of 2015 with a moment magnitude (Mw) of 7.8, killing nearly 9,000 people and injuring 22,000. The quake flattened large parts of the capital Kathmandu.

According to an article in Livemint, the quake was strong enough to shift Kathmandu south by 1.5m, wasn’t a big earthquake like the ones that measure over Mw8. It did, however, set the ground conditions that make a far larger earthquake, a “big one”, more favourable.

Seismologists are not sure when the “big one” will come. It could happen anytime soon or in a few hundred years. But they insist that will, sooner rather than later for which the country has to be ready.

The 2015 Nepal earthquake was caused by the ongoing tectonic collision of the Indian plate with the Eurasian plate. The three main fault lines in the Himalaya gather massive strain due to the tectonic movements.

Unfortunately for human population, earthquakes are the most effective way of releasing this strain and stress. It would take the really big, infrequent earthquakes of Mw8 and above, the so-called “crack” ruptures to relieve the strain that has built up.

Roger Bilham, a geological scientist at the Cooperative Institute for Research in Environmental Sciences (Cires), University of Colorado Boulder, wrote in a review paper that over the past 500 years, there haven’t been enough big earthquakes (Mw8 and above) to ease the accumulated strain in large sections of the Himalayan arc.

In 100 years, the accumulated strain would need an Mw8.6 earthquake for release. In 350 years, a Mw9 earthquake would be required.

India’s most recent major earthquake was in Kashmir in 2005 (Mw7.6) that killed 86,000 people on both sides of the Line of Control.

Seismologists are increasingly certain that major earthquakes in the Himalayas over the past 100 years have only loaded greater strain where they occurred, making a big earthquake even more “necessary” to relieve the elastic strain built up in the faults but they are not sure where the next major quake will hit .

In September 2019, the National Disaster Management Authority (NDMA) published an Earthquake Disaster Risk Index (Edri) report that looked specifically at 50 cities including the metros and cities in seismic zones IV and V (the two most active regions in India). Of the cities surveyed, 30 cities (including Delhi) are at medium-level risk and 13 (mostly Himalayan cities, including Shimla) at high risk.

Delhi also faces a major risk given that most of the city is self-constructed, without technical inputs that makes it vulnerable to high-intensity tremors.

In June, the Delhi high court came down heavily on the Delhi government and civic bodies for non-implementation of action plan for ensuring seismic stability of buildings in the national capital.