No-Deal Brexit looks more likely as EU can’t even agree with themselves! 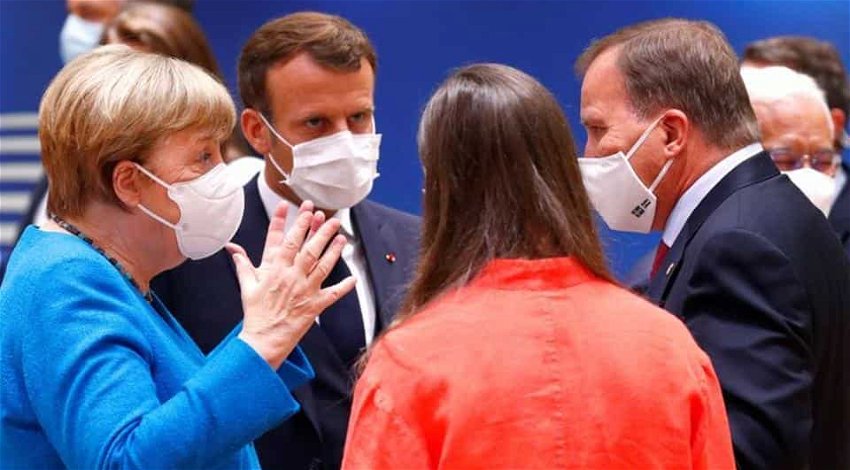 Heads of the 27 European Union states are attempting to come to an agreement on a massive coronavirus recovery fund and a budget amid reports of in fighting. As talks entered their fourth consecutive  day, there was some hope of a breakthrough.

HOWEVER, the European Union delegates appeared weary and even bleary as they began their fourth day of fighting over an unprecedented €1.85 trillion budget.

Progress was finally made this morning when the four northern European countries said they could accept a lower amount of grants. The rest would be paid as low-interest loans under the plans.

European Council President Charles Michel told EU leaders that he would put forward a proposal to reduce the grant part to €390 billion and announced a break in negotiations, according to diplomatic sources.

However, Dutch Prime Minister Mark Rutte said: “We are not there yet, things can still fall apart. But it looks a bit more hopeful than at the times where I thought last night that it was over.”

Austrian Chancellor Sebastian Kurz said: “Tough negotiations have just come to an end and we can be very satisfied with today’s result. We will continue in the afternoon.”

The Eurozone has been hit hard by the coronavirus outbreak. Italy and Spain have been two of the worst-affected countries in the world.

So although there is some movement, there is still no agreement four days into a negotiation that was supposed to only take two days.

It is the same old story, they can not agree on who should pay how much into the fund, and who should receive how much out of it in the shape of either grants or loans.

If the EU cannot agree how much to give themselves from a pot that they are building for themselves, then how can the UK expect the EU to agree to anything in the Brexit negotiations for a trade deal?

Get ready for a No-Deal Brexit I think!