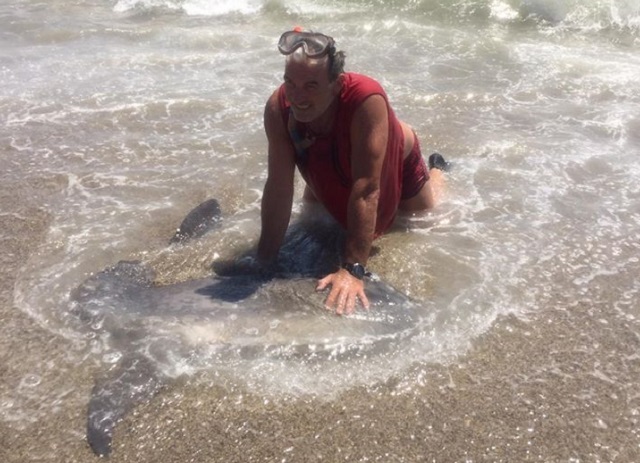 CONDEMNATION: Equinac says the man held the fish down despite several people telling him so stop and their being children present. CREDIT: Equinac Facebook @asociacionequinac.org

A COALITION of animal protection societies has launched legal action against a man who dragged a harmless moon fish out of the sea in Roquetas de Mar and held it down on the sand, leading to its death.
The Equinac marine life rescue association, ANADEL, ASPAC, Amigos de los Animales de Castellon and Liberta had already presented a formal report against the man, the owner of a sunbed rental business, for the incident on August 5 to the Almeria Guardia Civil’s SEPRONA nature protection service.
Now they have gone one step further and also reported him to a court.
Explaining the reasons for the move on social media, Equinac said the man had argued the presence of the moon fish swimming up and down the coast had had a negative impact on his business, hence he decided to pull it out the water “and hold on onto the sand until causing its death by asphyxiation.”
Equinac had noted in an earlier post that some beach-goers had mistaken the large fish for a shark.
The post goes on to say the hammock business owner had carried on holding down the moon fish despite several people telling him to stop and there being children present. It also says that Civil Protection lifeguards were unable to stop him, claiming he had “adopted a violent posture and did not want to let the creature go under any circumstances.”
It was, Equinac said, only when the Guardia Civil appeared that he let it go.
“If we want laws to change reports have to be made to the competent bodies, such as the courts, and not only be left in condemnations on social media”, Equinac affirmed.
Equinac revealed in the post that the lawyer handling the case was doing so free of charge.