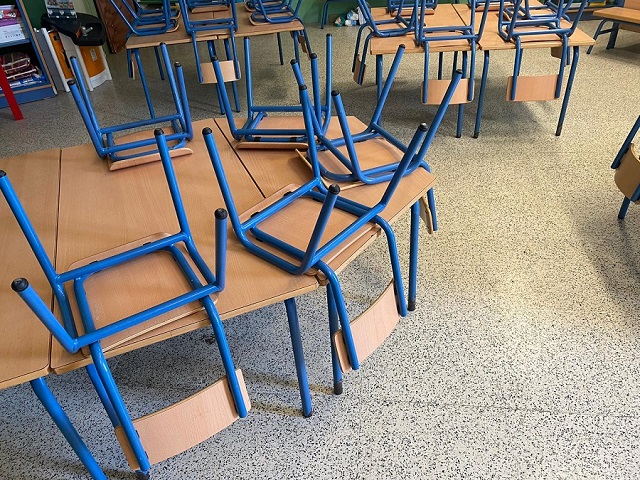 All teachers joined the strike

COSTA Almeria councils are getting ready for the return to municipal classrooms, although more than one has criticised what they claim is a lack of guidance from the Andalucia regional government on Covid-19 safety protocols and procedures.
“The council is going from school to school, registering the needs, adapting entrances, putting facilities in order and making an important effort which is going to reach €2 million”, Roquetas Mayor Gabriel Amat told press at a briefing on Wednesday.


But Amat also took the opportunity to complain about a “lack of clear directives” from the Junta, commenting that the Andalucia administration has “loaded the responsibility onto the municipalities and schools.”
The Mayor said the Roquetas authority is at the Junta’s “full disposal” for “whatever is needed”, that it would make available the necessary spaces, and stressed it is “at the side of the principals.”
At the same briefing, Roquetas Education councillor Juanjo Salvador revealed the council’s budget for schools has been increased by €621,000 this year.
Some €287,000 will be spent on extra cleaning and disinfection and €150,000 has been added to the schools maintenance allocation for adapting the entrances and actions like repairing windows to guarantee ventilation.
There will also be extra Civil Protection personnel at entrances at the beginning and end of the school day, seven extra caretakers and a community education team made up of a psychologist, a social worker and a social educator.
Garrucha council is another which said it taking steps to ensure schools are ready for the safe return of pupils, while remarking on the lack of guidelines from the Junta on issues like protocols, space in classrooms and the need for extra facilities.
The local authority announced it is carrying out a special cleaning and disinfection plan, which it pointed out represented a significant extra cost to the municipal coffers.
“Our part of the work, of getting the centres ready for receiving pupils in the health and hygiene conditions which the current situation created by Covid-19 is done”, commented Garrucha Mayor Maria Lopez Cervantes on Wednesday.
“We can contribute more, because there are public spaces which can be adapted and used as auxiliary classrooms, but we do not know the Junta’s plans or the number of teachers which will reinforce the current staff team in public education centres”, she added.
The Mayor expressed the view that now is the time for the Andalucia government to draw up “a good plan, with a corresponding budget allocation”, to ensure children are fully protected.
She also called for comprehensive information for parents “so they can have peace of mind and trust that the return to school is with all possible guarantees at this time.”