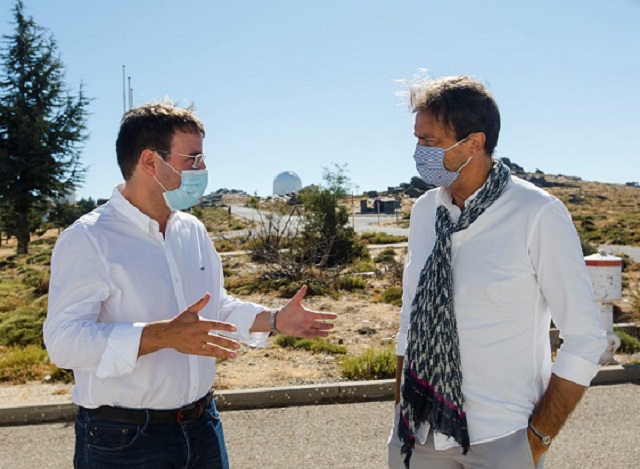 EUROSPORT is on the Costa Almeria this week to shoot specials about the destination for broadcast during the French Open Grand Slam tennis tournament.
The channel is set to run a number of programmes in which French former professional tennis player Henri Leconte tours different parts of the region’s coast and inland areas and showcases its attractions as as part of a promotional deal with the Almeria provincial council.
Diputacion Tourism deputy Fernando Gimenez accompanied Leconte and the Eurosport film crew when they visited the Calar Alto observatory.
“The importance of the presence of the Costa Almeria in Roland Garros does not only lie in the broadcast of more than 2,000 spots, but in a series of reports about the province. For this we have to thank and welcome Henri Leconte to our land because he is going to tell France and the rest of Europe about the treasures of the Costa Almeria”, the deputy commented.
Leconte replied that is an “honour to be an ambassador for Almeria and a privilege to be here.
“It is a very special land, different, full of contrasts.”
As well as the observatory, Leconte’s itinerary includes the Tabernas desert, the Cabo de Gata Natural Park, the Pulpi geode and the Almeria Civil War shelters.
He gets to try the cuisine in some of the provinces top eateries and to cook his own meal with a local chef. He also tries out some of Almeria’s active tourism offer, like scuba diving, kayaking, sailing and exploring in a 4×4 with a view to highlighting the region as an ideal destination for practicing all kinds of outdoor sports year-round.
According to the Diputacion the Eurosport deal means the Costa Almeria will reach 153 million homes in 54 countries during the French Open, which due to the Covid-19 pandemic is this year scheduled for September 27 to October 11 rather than in late May as usual.
Also in the agreement is Eurosport journalists producing  content on the province’s natural resources, cuisine and places for practicing sport for the channel’s social media for France and Spain.