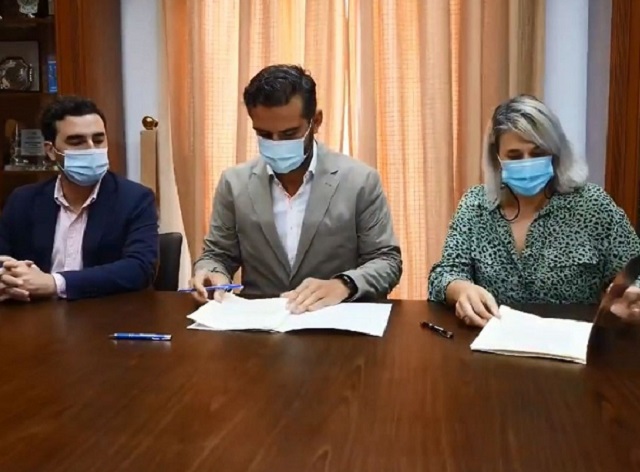 ALMERIA is set to act as a location for new Netflix series ‘Jaguar’ starring popular Spanish actress Blanca Suarez.
Almeria city Mayor Ramon Fernandez-Pacheco and Bambu Producciones representative Sofia Rodriguez signed the agreement on the filming earlier this week.
The Mayor said the shoot would “allow for showing the city’s best side”, and described the agreement signing as “a very important day.
“Almeria, which has traditionally been the land of cinema and shoots, wants to continue making a play for shootings so that story does not remain in the past and moves forward in the present and the future”, he commented.
Fernandez-Pacheco highlighted the benefits of the arrival of the new production.
“It is very positive because it will translate into an important group of people who will stay in Almeria’s hotels and eat in Almeria’s restaurants, as well as making purchases in our shops and generating job positions for the culture and cinema sector, he pointed out.
Set in the 1960s, Jaguar will portray a Spain which has become a refuge for many Nazis after World War II.
The series will tell the story of a young woman who survived the Mauthausen concentration camp and who is searching for the most dangerous man in Europe.
Filming is due to get underway next month. Some of the scenes will be shot in the provincial capital and some in other parts of the province.
We hope you enjoyed this article “Almeria set to act as location for new Netflix series ‘Jaguar’”.
Euro Weekly News is delighted to continue be able to bring you a range of News that doesn’t cost you anything but your internet connection. Whether it’s Local Spanish News or International Entertainment News, we’ve got you covered!
For more Local Spanish News from Almeria, head over the page on to the Euro Weekly News website.
Euro Weekly News, the people’s paper, we lead others follow!