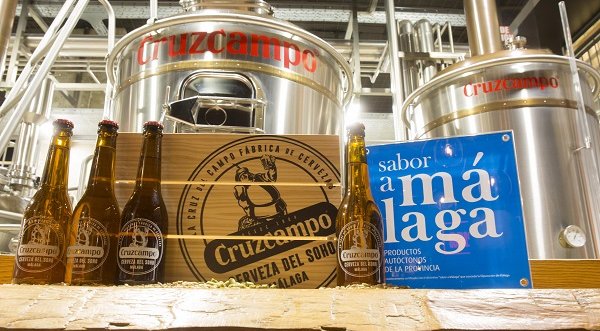 The promotional brand ‘Sabor a Málaga’, has delivered its distinctive seal this morning, Thursday, October 6, to the microbrewery ‘La Fábrica de Cruzcampo’ in recognition of the more than 30 craft beer recipes that they make every year in the central Malaga neighbourhood of Soho.

Since January 2018, in the microbrewery integrated in La Fábrica de Cruzcampo in Malaga, artisan beers of permanent styles in constant evolution have been made in situ, such as Cruzcampo Malagueta (APA), Cruzcampo IPA, Cruzcampo Session, Cruzcampo Trigo and Cruzcampo Strong Ale, which can be enjoyed throughout the year.

Other surprising limited batches such as gazpacho beer, or made with local ingredients, such as mango from La Axarquía, cane honey from Frigiliana, spices are also available.

The microbrewery has also been the origin of the Cruzcampo Andalucian IPA recipe, which is now produced in the factory in Seville and marketed throughout Spain.

Cruzcampo Andalucian IPA has recently been recognised in taste and design with two silver medals at the World Beer Awards 2020, among other awards.

The first vice president of the Diputación and deputy for Economic and Social Development, Juan Carlos Maldonado, stressed that it is “to be appreciated that a Spanish brand as important as Cruzcampo has wanted to incorporate new beers made in our capital and made with products from our province. Beers with a Malaga seal, which are committed to kilometre zero, which value the know-how and the fruits of our land, for the enjoyment of Malaga residents and visitors from around the world ”.

“These two years in Malaga have been full of hard work, but always accompanied by the creative freedom that Cruzcampo offers us when it comes to making new beers, and by the close and positive response from the locals. Their opinions and direct comments are what push and inspire us to create and research new recipes and ingredients ”, commented during the event, Jorge Varela, one of the brewmasters.

For her part, Ada Bernal, regional director of Institutional Relations of Heineken Spain, has pointed out that “receiving the ‘Taste of Malaga’ badge for these craft beers made 100 per cent in Malaga, is something that encourages us to continue working in this land, a city that breathes culture and creative spirit, as one of Cruzcampo’s brewing innovation epicentres”.

To celebrate the obtaining of the ‘Sabor a Málaga’ seal, the space located at Calle Trinidad Grund, 29 and whose restaurant area is managed by the hotel group Grupo Premium, will offer gastronomic sessions from Thursday, October 8 until the 18th, under the title ‘Savoring Malaga’, based on tastings of Malaga products, paired with craft beers, which will be enlivened by the live music that accompanies the local programming.

In addition, within the beer experiences agenda for the month of October, there will be tastings paired with typical dishes of Malaga, which will be guided by master brewers and which are carried out exclusively for groups of 4 to 10 people and under reservation, complying with all measures of security. This activity can be booked through the La Fábrica website https://lafabricadecerveza.com/.

We hope you enjoyed this article “Sabor a Málaga awards its seal to the craft beers from ‘La Fábrica de Cruzcampo’ in Málaga”.

You may also wish to read “Spain’s holiday coast need not worry as loyal fans say they will be back.”

For more Local Spanish News from Costa del Sol, head over the page on the Euro Weekly News website.