Protests Against Bullfighting in Estepona 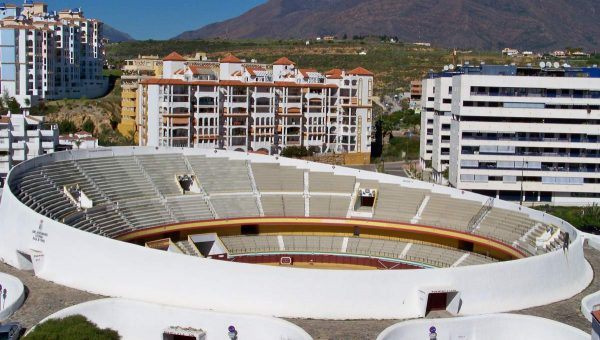 Protests against bullfighting took place at the Plaza de Toros in Estepona on Saturday 7th November.

A group of around 20 locals and ex-pats gathered outside Estepona’s Plaza de Toros on Saturday, lining themselves up at 2m spacing, to be in line with the required social distancing guidelines, and holding up placards with anti-bullfighting messages on them, to protest at the continuing of bullfighting there at the bullring, on a weekend where 12 bulls were killed inside the bullring, whilst all other activities have been prohibited with the current pandemic regulations.

In this day and age, many of the protestors say that bullfighting is cruel, barbaric and unethical, asking why would people pay to see the bulls slaughtered, and that it should be stopped, but of course, it is a tradition in Spain that goes back a long way in the country’s history.

The most common bone of contention among the protestors is why when everything else is on stop, and when there are moves to prohibit gatherings of people to avoid the spread of the coronavirus, are the authorities still allowing the bullfights to take place, and attracting large crowds of spectators, many not even social distanced if reports and photographs are anything to go by.

Present at the demo were members of Estepona Antitaurina, a group of locals strongly opposed to the bullfighting tradition, who aim to make similar protests at any future bullfights that might take place there in Estepona’s Plaza de Toros.

Thank you for taking the time to read this news article “Protests Against Bullfighting in Estepona”.
For more UK daily news, Spanish daily news and Global news stories, visit the Euro Weekly News home page.
Euro Weekly News is delighted to continue to be able to bring you a range of News from around Spain in English and Global News live as it happens.
Euro Weekly News doesn’t cost you anything but your internet connection. Whether it’s bringing you the local Spanish news or the International news today, we’ve got you covered!
Euro Weekly News, the leading free local and national newspaper in Spain, the people’s paper, we lead, others follow!