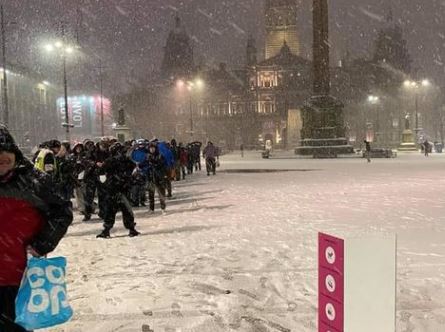 THE SCENE as hundreds queued for a Glasgow soup kitchen in heavy snow has been compared to former “communist countries”.

Monday evening saw hundreds of people queueing for vital food in Glasgow’s George Square as they waited to be helped by the Kindness Homeless Street Team Glasgow.

The homeless charity Kindness has spoken out to express that the vulnerable people in the city need more help. The pop-up soup kitchen normally expects to receive around 130 to 150 people when it opens four nights a week, but after Storm Darcy struck and covered central Scotland with heavy snow, the kitchen saw a staggering 220 people in desperate need turn out to be fed.

Throughout the pandemic the soup kitchen has helped those most vulnerable in the city but scenes on Monday were compared to a communist state that had been “decimated by years of communist rule”. A volunteer also commented on Facebook that, “This is Glasgow City Center last night in the 21st Century where people are waiting in line to be fed by Kindness Homeless Street Team Glasgow….this makes me so angry…this has to end.”

Laura McSorley, founder of the charity said, “Monday was a particularly busy evening and fed 200 to 220 people.

“The queue didn’t stop. We were like ‘where are all these people coming from’.

“Not all of them are homeless. Some are facing financial hardship and struggling.

“People we’re helping include those fleeing domestic abuse, those who have lost their jobs and houses through the pandemic and people homeless after breakdowns of relationships.

“It’s really sad that in this day and age people need to queue to get food.”

The charity which was founded in December 2019 only has 25 volunteers and is funded by public donations and fundraisers.