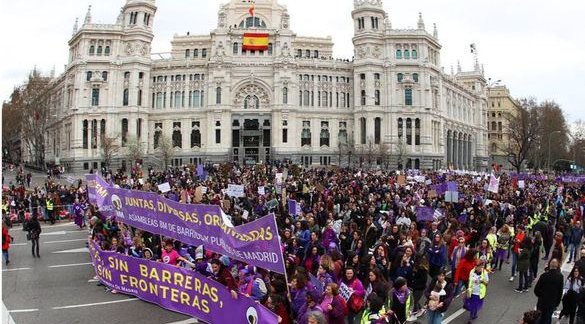 Vox calls for 8M International Women’s Day to be changed to National Day for Covid Victims.

THE far-right party intends to present its proposal to all city councils, autonomous communities and Central Government arguing “it is the general feeling of Spain”.

Santiago Abascal’s party has always been actively against feminist demonstrations and it has been one of the basic pillars of their opposition action.

But now Vox intends to take this a step further.

“We echo the general feeling of Spaniards to recover March 8 for the dignity of the victims of coronavirus. The 8M was allowed by the Government to participate in the great feminist demonstrations with the sole purpose of developing its ideological agenda over the health of the Spaniards,” said Vox spokesman Jorge Buxadé.

“We are obligated to honour all victims of coronavirus. Of course, all the deceased, their relatives, but also all those who have lost their jobs, who cannot work, the more than 100,000 businesses that have closed, those children who lost months of school, those families who have had to reorganise, while the Government has not reorganised anything and continues to destroy our nation,” he added.

Last year, Vox called a huge event in Vistalegre coinciding with 8M which, according to the party’s leadership, 9,000 people attended.

Two days later, deputy Javier Ortega Smith tested positive and the party conceded that it was an error of judgment to have staged the event, while pointing out that “we encouraged those who were at-risk population to stay at home and to following the act by streaming”.

“We cannot hide that it was a mistake for which we apologise,” added the party spokesman.

Vox’s calls to change 8M prompted a tweet from the Minister of Equality, Irene Montero, who wrote: “Vox does not like feminism. This 8M, more feminism than ever”.

She accompanied her post with a photograph of a banner that reads: “The opposite of feminism is ignorance.”

On Saturday, the 8M Commission revealed it is awaiting the go-ahead from the government for its International Women’s Day demonstrations in March.

THE working group that organises the peaceful demonstrations annually to mark International Women’s Day is seeking approval for this year’s events, but with changes in light of the pandemic.