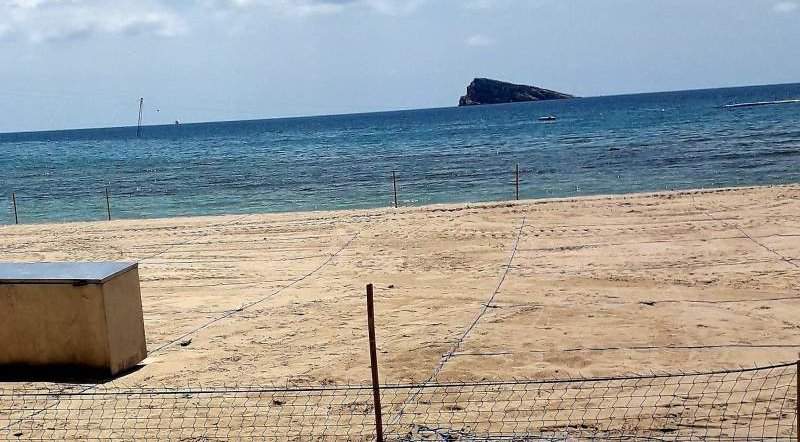 Benidorm Will Divide Up Beaches and Add Extra Safety Measures Once De-Escalation Begins.

BENIDORM City Council will once again divide the beaches and implement other COVID security and prevention measures as it looks likely that de-escalation plans will begin from March 1.
The plan to return to the marked out sections on the beach was announced on Wednesday, February 24 by the local government, which has said that votes on the proposal from the mayor, Toni Pérez, will be cast on Friday, February 26.
The proposal, according to the mayor, will see a return to the “an extension to the organisation and operation model that we implemented in June 2020 under the ‘Benidorm Beach Safety’ project, on the basis of guaranteeing capacity, physical distancing and health security, as well as the [guarenteeing] the enjoyment of all users.”

Toni Pérez stated that “it is necessary to adapt the configuration and services of our beaches to stop the spread of the virus, despite figures improving, although we anticipate an increase in beaches users for the months of March and April, a period that includes two important holiday moments such as the San José bridge and Holy Week.”

The proposal, from March 1 to April 30, includes “the subdivision of the sandy areas, with spaces of 16 square metres (4×4 metres) to ensure physical distancing and personal observance of these measures; surveillance and rescue service consisting of a maximum of 19 personnel and which includes a boat and ambulance; as well as a reinforcement of cleaning at the foot of beaches and coves on the morning and afternoon shifts complementing the usual night service.”

The mayor has clarified that during this period “the rental service of sunbeds and umbrellas will be suspended, so that no fee will be paid to the company for the integral management of the beaches.”
Finally, Toni Pérez stated that “the implementation of all these services is one more example that the city as a tourist destination is fully prepared for the enjoyment of beach users while always keeping health security at the core of all actions and strategies that are undertaken by the City Council.”