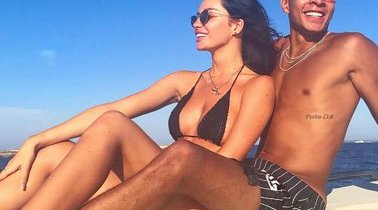 Dele Alli’s Model Girlfriend Ditches Him For ‘Playing Too Much Fortnite’.

MODEL Ruby Mae has split up with Spurs and England forward, Dele Alli, due to his obsession with playing the hit computer game ‘Fortnite’.
The Sun claims pals of the 24-year-old stunner revealed that she had become ‘incensed’ with Alli’s gaming habits since their time together.
The Sun’s source claimed: “Dele and Ruby Mae are finished.
“Their relationship has been turbulent, but it now feels very much like the end. Ruby is sad but looking out for herself now.

“She had enough of Dele’s good-time nature, and packed up her things. She’s looking after number one from here.”
Mae, who has modelled for Hidden Fashion, Chanel and Dolce & Gabbana, was spotted kissing after England’s shock 2-1 defeat to Iceland at Euro 2016 – bringing the spotlight on their relationship.
Despite events off the field, Alli is enjoying a resurgence of form having been dropped for most of the season by Tottenham boss, Jose Mourinho – although the team continue to struggle – even leading to speculation that Mourinho will soon be fired.
24-year-old Alli signed for Tottenham Hotspur in February 2015 for an initial fee of £5 million, being loaned back to the Dons for the remainder of the season. In each of his first two campaigns at White Hart Lane, Alli was voted the PFA Young Player of the Year and made the PFA Team of the Year. However, he has struggled to recreate the form that has earned him 37 caps for England.
Hopefully, the Spurs star will be able to get off Fortnite and try to patch things up with Mae, or at least, get back to playing the football the world knows he is capable of playing.