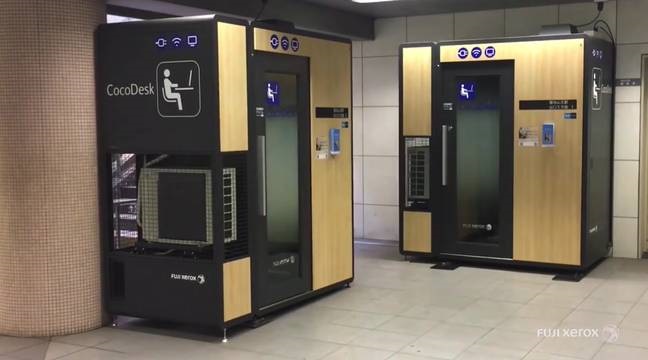 Japan Takes Teleworking To The Next Level By Installing Booths In The Tokyo Metro. image: Fuji Xerox

Japan Takes Teleworking To The Next Level By Installing Booths In The Tokyo Metro.

JAPAN: No sound leaked into the “cube”, Masaki Kakishima, a tester, had opened the booth using his smartphone and once inside he searched for a job. It’s interior dimensions are 1 meter wide, 1 meter long and 2 meters high.

The cube is located in a  passageway of Tokyo’s bustling Takadanobaba Station, which has thousands of commuters per hour passing the new attraction. Kakishima, 40, tested out the tiny Telecube “personal office” at the Seibu Railway side of the station in the capital’s Shinjuku Ward. Inside the cube is a desk, chair and an outlet to plug in a PC.

The cube is also outfitted with a ventilation fan as a precaution against the coronavirus.

“It was a huge help since it’s difficult for me to talk in an online interview at home or in coffee shops,” Kakishima said. “Though it’s located in a train station, the cube’s interior is quiet enough that one can easily concentrate on work.”

Kakishima spent about 10 minutes in the cube in front of his computer, checking to see if the interior would work appropriately for an online interview.

The Takadanobaba Station cube is one of many small offices boxes that have recently debuted at train stations. Their number has been rising sharply to cater to users who want to work anytime without worrying about their surroundings.

More and more teleworkers are taking advantage of working out of shared offices or karaoke parlours, creating new business opportunities during the COVID-19 crisis as companies aggressively start new services targeting them.

Telecube booths have since been installed at stations, office building entrances and elsewhere. A total of 120  booths had so far been installed at 54 locations in Tokyo, Osaka, Nagoya and other areas as of the end of December. The figure is expected to top 1,000 units by 2023.

East Japan Railway Co. (JR East) also set up personal offices at 30 sites in and outside stations by the end of September. At 12 of the locations, 36 box-shaped booths are available for use.

Approximately 52,000 people have registered for the service to use the workspaces, with some of the booths becoming difficult to book during the day, according to JR East public relations officials.

JR East is planning to raise the number of its personal offices to 1,000 nationwide by fiscal 2025. Under the CocoDesk brand name, Fuji Xerox Co. operates 40 private office booths at 21 spots at stations along Tokyo Metro and Keikyu rail lines and elsewhere in Tokyo and Kawasaki.

Fuji Xerox is looking to expand its business to Osaka and Nagoya as well.

“The service helped me cut my travel time because it eliminated the need to return to my company,” said a 42-year-old sales rep of an information technology service provider, who used a CocoDesk booth at Tokyo Metro’s Otemachi Station in early October to attend an online meeting between his visits to clients.

CocoDesk booths cost 250 yen ($2.40- €2.0) before tax for 15 minutes- discounts are offered for corporate users. More than 80 per cent of 1,000 teleworkers said they want to keep working outside the office, according to an online survey conducted by Rengo, the Japanese Trade Union Confederation.

More than 70 per cent of the respondents said the reason they preferred teleworking was that they could “make effective use of their time as I do not need to go to the office.”

Still, some problems remain with abandoning working from the office. Respondents who said that “it is sometimes impossible to clearly separate work and private time” topped 70 per cent, and 80 per cent of those who live with children of elementary school age or younger said that it is “difficult to telework when children are at home.”

Demand for telework cubes is anticipated to rise further to respond to those challenges.

“People who have started teleworking but can’t work from home without distractions may have begun using our service,” said a Fuji Xerox official, explaining why the average usage time of its service has increased from 60 to 70 minutes since debuting in February.

Catering to individuals who have difficulty concentrating on work at home, Nippon Steel Kowa Real Estate Co. is moving to set up work booths at common spaces in apartments and plans to set them up in a condominium in Tokyo’s Itabashi Ward, scheduled for completion in December.

Companies are scrambling to win over consumers in telework-related businesses, vying to fulfil the needs generated by the pandemic and starting new services to make up for losses in their core fields. Aoyama Trading Co. on Oct. 8 opened its BeSmart shared office in its Aoyama Tailor Suidobashi East Exit outlet near Tokyo’s JR Suidobashi Station.

The space has 90 seats, which take up half the store’s sales area and has soundproof booths. Though new services have sprung up to cater to teleworkers, the switch from working at the office to home has hurt some existing ones.

Due to the drop in people working at the office between April and September, sales in Aoyama Trading’s business wear department fell 50 per cent year on year during the period, the company said. By making full use of its outlets as shared offices, Aoyama Trading is trying to attract new customers and plans to debut BeSmart offices at other stores.

For 500 yen (€4.0) after taxes, Big Echo customers can use the spaces for an hour, with unlimited soft drinks included. Big Echo saw its sales in the telework package triple in July compared with February. Part of the attraction of the spaces for customers is that the soundproof, closed karaoke rooms are well-suited for checking confidential business documents and talking with clients by phone.

Big Echo isn’t alone. Other leading karaoke businesses in Japan are pitching similar services as well. At the time of writing, there are no plans to expand out of Japan but that may change as Western companies become aware fo the product.

Thank you for taking the time to read this news article “Japan Takes Teleworking To The Next Level By Installing Booths In The Tokyo Metro”. For more UK daily news, Spanish daily news and Global news stories, visit the Euro Weekly News home page.