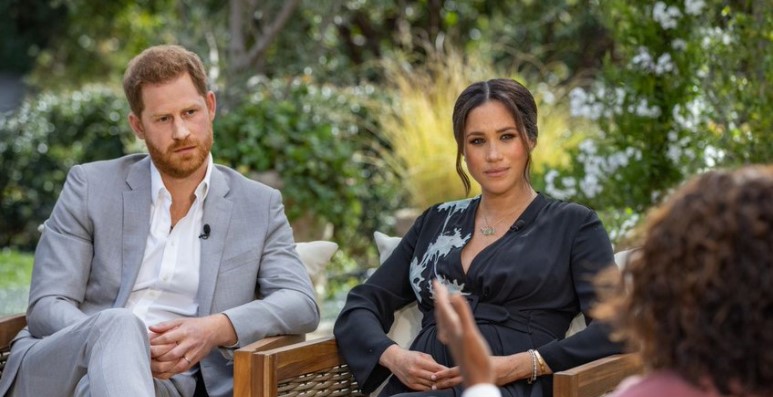 Prince Harry now joined his wife Meghan, and Oprah, and is asked about the pregnancy, “Is it a boy or is it a girl?”, as the couple go back and forth, “you can say it, no you can say it”, before Harry reveals, “It’s a girl”.

Speaking of the bias against Meghan in the UK press, Harry said, “I wasn’t aware of it, to begin with, but my God it doesn’t take you very long to become aware of it. I asked for calm from the British tabloids: once as a boyfriend, once as a husband, and once as a father”.

Oprah asked for the simplest explanation as to why they left the UK, to which Harry responded, “Because we didn’t get enough support”, and she asks if they ‘blindsided’ the Queen, to which Harry said, “No, I have too much respect for her”, but that he suspects the story came from within the institution.

Referring to earlier in the interview when Meghan revealed her suicidal thoughts, Oprah asked Harry if he had approached his family for help for her,  and he says he was ashamed of admitting to his family that Meghan needed help.

The Prince said his family had many opportunities to show support for Meghan, pointing out, “I’m acutely aware of where my family stands and how acutely scared they are of the tabloids turning on them. There is an ‘invisible contract’ between the royal family and the tabloids”, he said, claiming that if the family is prepared to wine and dine the press, then they will get better coverage.

“There is a level of control by fear'” he stated, with the tabloids controlling the family, “The institution survives based on their relationship with the press” he added, with Meghan adding that the coverage in the press because it had racial overtones, changed the level of threat to the couple, “It changed the death threats”, she said.

Asking about “Megxit” Oprah asked Harry whether he would have stepped back were it not for Meghan, “No”, he replied, “I was trapped, but I didn’t know I was trapped”, with Oprah asking what he means by being trapped, “Trapped within the system, like the rest of my family are. My father, my brother they are trapped”. he says.

Prince Harry revealed that after he and Meghan stepped back as working royals, the idea of deals with Spotify and Netflix came after “my family literally cut me off financially”, saying that he was cut off in the first quarter of 2020, shortly after he and Meghan announced they would step back as senior members of the royal family.

He was left with just the money lhis late mother, Princess Diana, “Without that, we wouldn’t have been able to do this,” he said – presumably referring to their life in California – before adding “All I wanted was enough family to get security and keep my family safe”, as reported by theguardian.com.

Thank you for taking the time to read this news article “Oprah With Prince Harry And Meghan Markle Part II”.