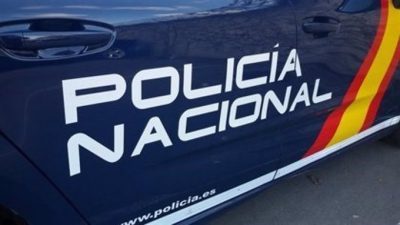 Mother of a 3 month old baby goes to prison for abuse in Malaga. Image: Twitter

A MAN has been arrested in Malaga after impersonating a police officer and searching a group of young people.

Officer arrested the man after he was found to be impersonating a police officer and searching young people in Malaga.
The incident took place when officers from the Local Police saw a man searching four young men in Malaga city.
According to Spanish newspaper Sur, the man took their belongings and searched the group, saying he was a plainclothes police officer.
The Local Police patrol approached the man thinking he was an agent and offered to help him. The man identified himself as an officer from the National Police, showing them a police badge, and telling them he was on duty.
When he finished speaking to the group, the man asked the Local Police patrol to wait there as he was going to speak with his partner, however the Local Police became suspicious that he was not carrying a regulation weapon and was alone.
The agents decided to follow him and asked him to stop, but he walked off, saying that he was going to look for his partner.
The officials then asked him to show them his badge again and when they saw it for the they realised that it could be fake and asked to see his professional card. He replied that he had left in his locker at the police station.
He then told them another story, that he had been in Malaga with his wife and had decided to act after seeing the group, before he later admitted he was not a policeman.
The officers arrested him for impersonating a police officer before identifying a total of nine young people who alleged they had been searched by the suspect.
The man reportedly also had tried to search a group of homeless men.