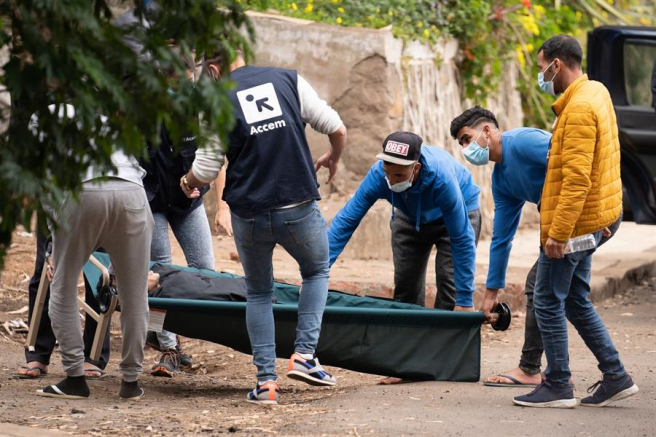 AN immigrant camp on the island of Tenerife erupted in violence on Tuesday that was so severe it required the intervention of the National Police. Eight people in all were arrested and over a dozen were left injured when fighting broke out.

A member of the Tenerife Migrants Support Assembly, told 20 minutes, “What happened today – we do not know how it happened, we do know that there are people on hunger strike. They are tired, being there a long time without knowing about their future, and they are in very bad condition, which is why they have been protesting for weeks.”

Apparently, it is not the first time that the security forces have entered the camp. On several occasions – due to protests over the conditions and the food – there have been moments of tension that have required the intervention of the National Police.

Below, police survey a blood-stained stairwell after the fighting stopped. Emergency services at the scene treated a young man who had suffered a broken leg during the fracas. One paramedic said that such was the severity of the break that the bone was left sticking out of one immigrant’s leg and he had already lost a large amount of blood when they arrived at the scene.

It is understood that many immigrants in the camp are on hunger strike, and have been for days. ‘This incident is not an isolated case,’ reported one aid worker at the camp, ‘lack of food, poor damp conditions and a lack of clarity over their (the immigrants) situation is causing the unrest.’

It was reported last week that some of the camp’s detainees were caught trying to flee the island smuggled in the back of delivery lorries. The exodus of migrants from North Africa continues unabated to the Tenerife shores and the camps are already overcrowded. ‘If the situation is not resolved soon then more trouble is likely,’ added the source.

Ex-pats were left horrified last year on the beach in Torremolinos when they witnessed a boat full of immigrants ditch their inflatable dingy and make a run for the town centre. Minutes later local police rounded them up into the back of police vans, the group of men fought but were overcome by the large police presence and were taken to the local station for processing.

Two women and a man lost their lives and another 41 people were rescued from the sea after a dinghy capsized off the coast of Poris de Abona in Tenerife on Friday morning, March 26.