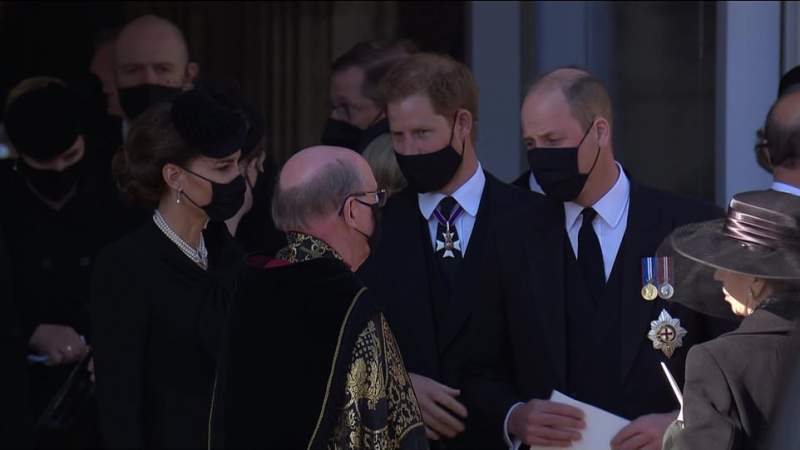 Prince William And Harry Photographed Talking To Each Other After The Duke of Edinburgh’s Funeral.

Prince William and Prince Harry were photographed chatting after Prince Philip’s funeral.  The conversation marks the first time the brothers have spoken in public since Harry and Meghan Markle’s bombshell interview with Oprah Winfrey. Harry, William, and Kate Middleton all chatted together as they left the Duke of Edinburgh’s service.

Earlier, the procession, led by Prince Charles, had seen the family walk in pairs behind the coffin, apart from princes William and Harry who walked with Peter Philips. Troops from the armed forces previously formed a procession ahead of the funeral of the Duke of Edinburgh.

According to the Mail Online, Kate and William, the Duke and Duchess of Cambridge, were earlier seen arriving at the funeral, as well as Prince Charles. Before them, mourners arrived ahead of the funeral of Prince Philip this afternoon.

The guests arrived as Prince Philip’s coffin was moved ahead of a procession, while the royal’s insignia had been placed on the altar at St George’s Chapel where the funeral took place at 4 pm (3 pm UK time).

The brothers’ cousin, Peter Philips, walked between the pair during the procession at the funeral.

The Queen sat by herself in the quire of St George’s Chapel. Prince Philip is believed to have planned his own funeral, including the order of service.