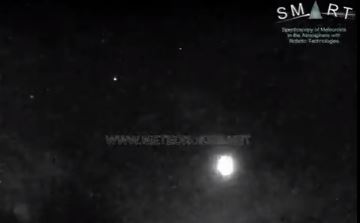 SPECTACULAR fireball flies across Spain at 61,000 kilometres per hour

Star gazers in Spain had a rare treat on Friday night, April 16 as a stunning fireball was clearly visible for almost a minute over much of the country when a rock from an asteroid entered the Earth’s atmosphere at an impressive 61,000 kilometres per hour. According to the Astrohita Foundation, while most spectacles of this kind are extinguished immediately or at least within a few seconds, this fireball remained alight for nearly sixty seconds.

The SMART Project is responsible for running the Network of Bodies and Meteors of Southwest Europe, which closely monitors events of this kind, and the phenomenon was reported at the La Hita Astronomical Complex in Toledo, as well as in Almeria, Granada, Sevilla and Madrid.

The SMART Project monitors and analyses the impact of asteroids against the Earth’s atmosphere, and astrophysicist Jose Maria Madiedo concluded that this space rock was what is known as a ‘grazing fireball’ – a rare type of asteroid that doesn’t actually strike the Earth but rather only ‘grazes’ the atmosphere before heading back out to space.

“Such meteors are known as grazing fireballs because they only graze the Earth’s atmosphere rather than plunge through it. This is possible due to the angle at which it approaches. Like a rock that skips off the surface of a lake rather than plunging in, a meteoroid can skip off the atmosphere if its angle is very small.”

The rarity that appeared over Spain became visible some 85 kilometres above the province of Lugo in north-western part of the country, and gradually lost altitude. From there, it travelled in a south-easterly direction toward Madrid, where is began to gain altitude again and head towards the southwest of Spain. After almost a minute, the fireball’s light winked out about 87 kilometres above the Mediterranean Sea off the cost of Almeria, before it left the Earth’s atmosphere.