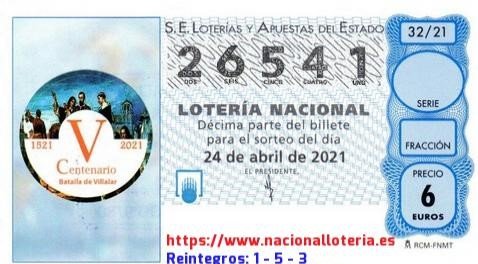 Lucky lottery winner in Velez-Malaga scoops top prize.
THE first prize (primer premio) winning ticket in Spain’s Saturday National Lottery was sold at a lottery shop in Calle Cristo jackpot number 26,541 Velez-Malaga.
The jackpot ticket – number 26,541 – has scooped one lucky winner in the town a share of €600,000.
There were seven primer premio winners across Spain following Saturday’s draw, with jubilant lottery players in Valencia, Almería, Jaen, Andalucia, Las Palmas, Leon, Madrid and Ourense also hundreds of thousands of euros better off.
The second prize of €120,000, which corresponded to the number 72,438, was bagged in Murcia and Barcelona.
An article published by Lotteryngo ‘Lottery statistics 2021’ revealed some surprising facts about lottery winners.
For example, is it important in which state you play the lotto ticket? And how do those that are lucky enough to win jackpots change?
Apparently, the United States can brag that it has two of arguably the most popular lotteries in the world offering the highest jackpots from all lotteries available.
These are US Powerball and MegaMillions, both offering a guaranteed jackpot fund of $40 million (€33.07 million). There have been times when people have scooped over $500 million (€413.32 million).
And last month, we told the devastating story of a Brit couple who missed out on £182 million (€210 million).
Students Rachel Kennedy, 19, and Liam McCrohan, 21, from Hertfordshire, were left devastated when they realised their normal numbers had come up but their ticket payment hadn’t gone through.
The pair had used the same numbers 6, 12, 22, 29, 33, 6 and 11 for five consecutive weeks and thought they had scooped the huge jackpot when they appeared in a Friday draw in March, and Rachel even got a notification saying they had a winning match.
However, she had set up an automatic payment for her Euromillions ticket, but the payment wasn’t made has she didn’t have the right funds, and the pair were left empty-handed.