Tivoli World Workers Protest To Demand The Reopening Of The Park 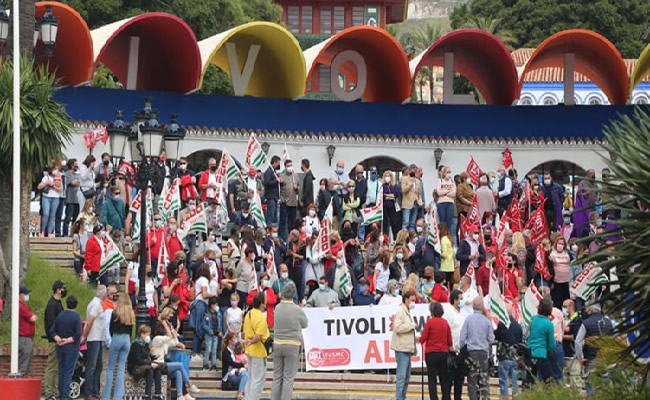 Tivoli World Workers Protest To Demand The Reopening Of The Park. image: twitter

Workers from the Tivoli World attraction Park in Arroyo de la Miel in Benalmádena, along with officials from the CCOO and UGT unions, congregated at the front entrance to the park this morning, Monday 3, in an effort to convey a message to the company not to keep the attraction closed, and to reopen it for this Summer.
Around 200 people, demanded that “Tivoli not be closed”, shouting, and waving banners, as Lola Villalba, the general secretary of Málaga’s CCOO Services Union, explained, “the Tivoli amusement park has been in bankruptcy since last August, at the proposal of the Tremón company, which is the owner of this leisure facility”.

Ms Villalba continued, “Tivoli employs more than a hundred people, directly plus another hundred jobs indirectly. These are people who have been working for many years in this park that this 2021 turns 50”.

The CCOO leader added, “It would be a shame to let such an important leisure facility for Málaga and Benalmádena die, not only because of the people who live here, who the vast majority of people know of, but because it is a hub for tourism and a benchmark on the Costa del Sol”.

Villalba also said that, “CCOO requires the bankruptcy administrator and the Commercial Court N01 of Málaga to open Tivoli this season, since the billing data from last year shows that this amusement park is totally viable”.

Víctor Navas, the mayor of Benalmádena, who also attended the rally reminded the demonstrators that Tivoli is immersed in a judicial process that complicates the continuity of its activity, saying, “The bankruptcy administrator has once again demonstrated that Tivoli is economically viable, now we demand that the dispute over the ownership of the park and its continuity be resolved, and from there as the Town Hall we are ready to help, together with other administrations such as the Junta or the Deputation in search of investors”, as reported by laopiniondemalaga.es.
The Euro Weekly News is running a campaign to help reunite Brits in Spain with their family and friends by capping the costs of PCR tests for travel. Please help us urge the government to cap costs at http://www.euroweeklynews.com/2021/04/16/ewn-champions-the-rights-of-brits-in-spain-to-see-loved-ones-again/