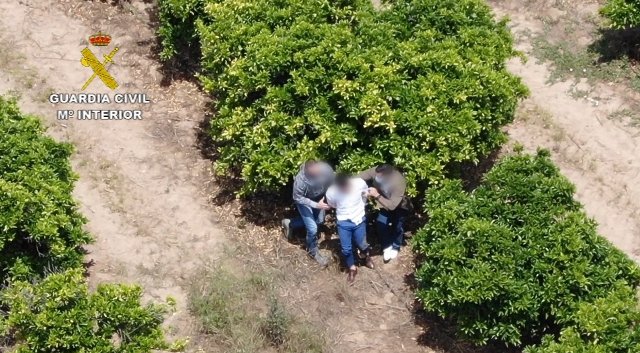 Drug trafficker on the run for 10 months is arrested in Sevilla.

THE Guardia Civil has arrested a drug trafficker who had been on the run since last July during a Holy Communion celebration at a restaurant in La Algaba, Sevilla.

The detainee initially tried to make a getaway, running through an orange grove, but officers chased him and with the help of a drone, he was caught and arrested.

The detainee is believed to have been a ringleader of a 30-strong criminal organisation known as the Lanas Brothers, which was shut down last year.

As part of the police operation, the Guardia Civil seized over five tonnes of hashish, two kilos of cocaine, more than 30 vehicles, several firearms (including a Kalashnikov submachine gun) and in excess of €100,000.

The detainee, known as D.J.C.M, alias Chacon, went into hiding and is believed to have been living in several Andalucian provinces in order to avoid arrest.

He was finally captured after the police received information about a family event in a restaurant where relatives of the fugitive were going to celebrate a communion.

The restaurant was surrounded by plainclothes officers, but Chacon befcame suspicious and made a run for it, jumping a fence and fleeing across a field before eventually being apprehended.

In other news, National Police in Marbella arrested a 30-year-old fugitive wanted in France – who had a European Detention and Surrender Order (OEDE) issued against him – after he sped through a police roadblock, resulting in a car chase that ended in the Costa del Sol town on Estepona, in the province of Malaga.

Teams from the Citizen Attention Group and the Prevention and Reaction Unit had arranged a control of vehicles and narcotic substances in Marbella, and the officers identified a high-powered vehicle approaching at such a speed that it was clear it was not going to stop.

By conducting an evasive manoeuvre, the driver cleared the police control, while endangering the officers and other road users in the process, thus causing police patrol cars to give chase, and the vehicle was eventually intercepted near Estepona, with the driver arrested for failure to stop, and dangerous driving.