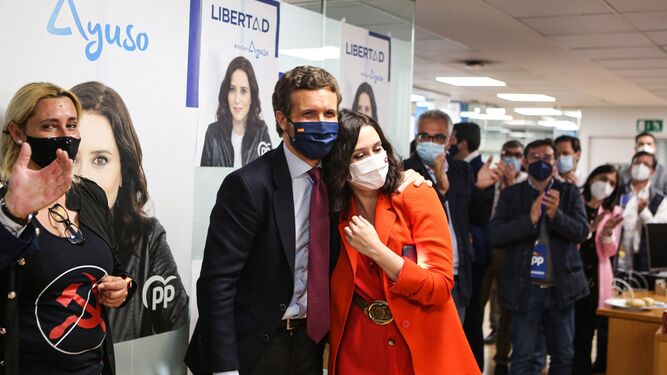 Isabel Díaz Ayuso Celebrates Victory In Madrid With More Than 60% Of The Votes Counted.

Isabel Díaz Ayuso, the conservative leader of Spain’s Madrid region, who for months defied the leftist central government by keeping bars and shops open during the COVID-19 pandemic, has won the regional election, according to preliminary results and opinion polls.

Dozens of flag-waving supporters gathered outside the People’s Party (PP) headquarters, cheering and dancing as preliminary early results revealed regional leader Isabel Diaz Ayuso more than doubled her score from a previous election in 2019. Ayuso had banked her campaign victory on her ‘loose COVID strategy’ to appeal to voters who were tired of restrictions on their freedoms imposed to fight the pandemic.

Voters “have backed her handling of the pandemic, her love for Madrid and her defence of the freedoms of the Madrilenos,” Ayuso’s campaign director Alfonso Serrano told reporters.

Ayuso fell just shy of winning enough seats to rule the region without support from any other party, according to the telephone poll conducted in the last few days by GAD3 for broadcasters TVE and Telemadrid, which saw her with 62-65 seats. Preliminary results with 49% of the votes accounted for also showed Ayuso winning 63 seats, from 30 in 2019.

Critics had accused Ayuso of neglecting health services while looking after business. But she won the support of many Madrid residents by refusing to close bars and restaurants to help curb the pandemic even though she came under intense pressure from the government of Pedro Sanchez.

The result will also be damaging for the central government, which is headed up by the PSOE in coalition with junior partner Unidas Podemos. The leftist Más Madrid party gained support at Tuesday’s polls, but only by a point, which was less than expected. Unidas Podemos, meanwhile, gained just two points. This was far from what was needed to compensate for the PSOE’s result. Ciudadanos, meanwhile, lost all of its 26 seats. With less than 5% of the vote, the party did not gain enough votes to even enter into the regional assembly.

Unlike in other elections in the COVID era in recent months, turnout was high, at around 74%, well up from 64% in 2019. Final results are expected later in the evening.