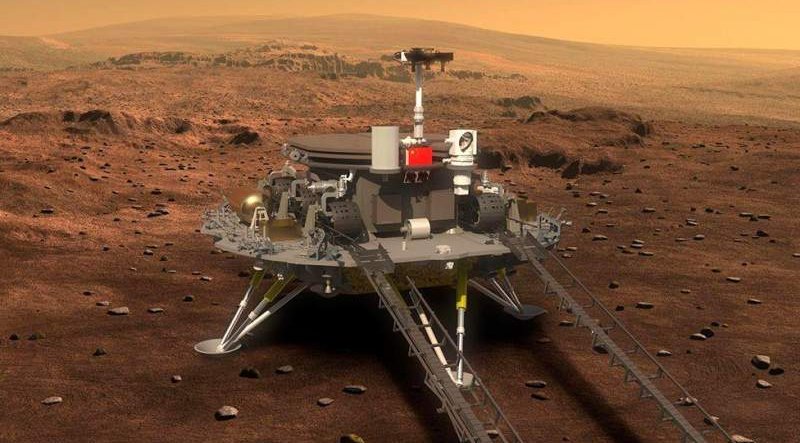 China Becomes Only The Second Country To Make Historic Touchdown On Mars.

China has now become only the second country to touchdown on the Red Planet after the United States. Overcoming the difficult landing is a big success for the country’s space programme. Chinese state media announced the historic event early on Saturday, May 15, morning.

The six-wheeled Zhurong robot was targeting Utopia Planitia, a vast terrain in the planet’s northern hemisphere. The high-tech vehicle used a combination of a protective capsule, a parachute, and a rocket platform to make the descent reported Yahoo.

The successful touchdown is a remarkable achievement, given the difficult nature of the task. Only the Americans have really mastered landing on Mars until now. All other countries that have tried have either crashed or lost contact soon after attempting touchdown.

The UK sent it’s Beagle 2 spacecraft to Mars, images later showed that the UK’s Beagle 2 had in fact successfully landed on the surface of the red planet in 2003 but then failed to fully deploy its solar panels. Without these, it could not communicate with Earth and scientists lost contact.

Chinese President Xi Jinping congratulated the mission team’s “outstanding achievement” in a special message. “You were brave enough for the challenge, pursued excellence and placed our country in the advanced ranks of planetary exploration,” he said.

The robot officially landed at 07:18 on Saturday, Beijing time (Friday 23:18 GMT), according to state media. Within 17 minutes after unfolding its solar panels the craft was sending signals back to Earth.

Thomas Zurbuchen, the associate administrator for NASA’s Science Mission Directorate, congratulated China’s space agency shortly after the landing was confirmed. “Together with the global science community, I look forward to the important contributions this mission will make to humanity’s understanding of the Red Planet,” he wrote on Twitter.

In February, the United Arab Emirates’ Hope probe also entered into orbit around Mars, making the UAE only the fifth nation or entity to do so. The spacecraft is designed to circle Mars and study the red planet’s atmosphere.