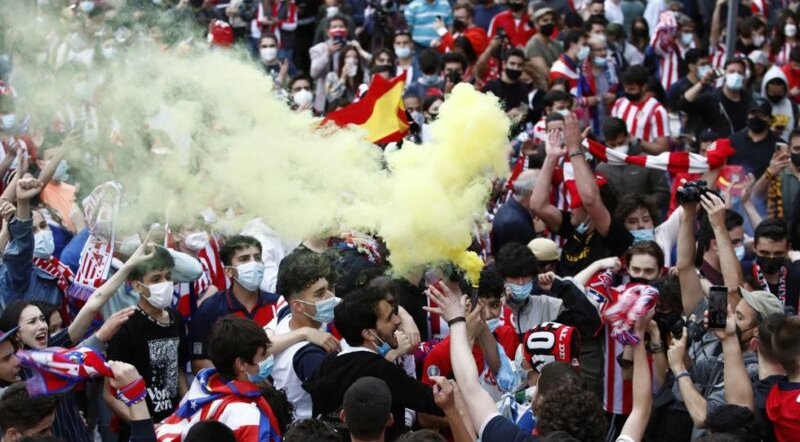 CELEBRATIONS turned into tragedy at the Atlético de Madrid Stadium this afternoon after a 14-year-old boy was killed when the van in which he was sitting at the window of entered the underground car park in the Plaza de Santa Ana, in the Centro district of the capital. The boy’s head struck the wall, killing him almost instantly. The red and white flag of his team was thrown on the access ramp to the parking area by fans after learning of the tragedy.

According to a witness, a group of kids were travelling in a black van with several of them sitting at the windows. When they passed through the car park at around 9.20pm, they shouted chants of joy for Atlético de Madrid’s victory, while waving their team’s flags. According to the witness, the driver was going “somewhat fast” for the area and had even knocked down “up to seven construction fences” before entering the parking area.

Emergency services were quickly despatched but sadly it was too late and the boy was declared dead at the scene an hour later after brave attempts by the doctors to resuscitate him failed.

A team of psychologists attended to the minor’s relatives and the parents who travelled to the scene of the accident, according to sources from Emergencias Madrid and confirmed to Efe. The Municipal Police of Madrid are investigating the cause of the boy’s death. Atleti secured the LaLiga title tonight, Saturday, May 22, thanks to a 2-1 win over Valladolid- Correa and Suárez scored the goals in the second half.