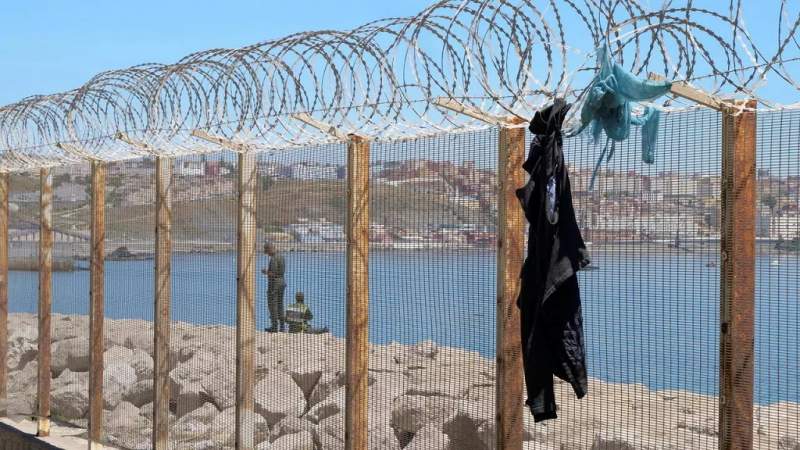 Spanish Police Report The Situation On The Ceuta border As One Of “Tense Calm”.

The situation on the Ceuta border today, Saturday, May 22, is one of “tense calm”, according to security services. Recent events have shown that border security with Morocco in normal conditions depends exclusively on the cooperative attitude or not on those on the other side of the fence.

Police chiefs have said that there will be neither vacations nor police permits/leave until the current crisis is resolved- that was the order already received by all the troops deployed in Ceuta and which is also understood to be extended shortly to those in Melilla. Only an officer who puts forward a compelling case may be excused from duty.

With diplomatic ties already deeply strained between the two nations over a political spat linked to Western Sahara, Spain’s top diplomat summoned Morocco’s ambassador to express her “displeasure” after thousands of migrants were able to enter the enclave as Moroccan security forces apparently turned a blind eye and let them enter Ceuta.

“I reminded (the ambassador) that border control has been and must continue to be the joint responsibility of Spain and Morocco,” Foreign Minister Arancha Gonzalez Laya told journalists.

Soon after, Morocco’s foreign ministry said it had recalled its ambassador from Spain. Spanish Prime Minister Pedro Sanchez flew into Ceuta after the record influx which has overwhelmed the tiny peninsula.

“We will restore order in the city and along our borders as quickly as possible,” Sanchez vowed ahead of a scheduled visit to Melilla, Spain’s other coastal enclave, some 400 kilometres (250 miles) to the east.

The same fate runs the civil and military guards who these days in Ceuta guard the border that on Monday 17 was broken by thousands of people from Morocco. The division of labor in Ceuta is right now as clear as it is enormous. While some do not stop guarding the fence due to the unpredictable behavior of the Moroccan Gendarmerie, others have to take care of the rest. And the rest is a lot.

At approximately 6:30 pm May 20, the body of the deceased man was located after it had been floating closer to the coast due to strong waves caused by an easterly wind. Officers of the Guardia Civil 061 recovered the body from the water, however, before they could try and revive him it was verified by a forensic doctor that he did not have a pulse. He was declared dead at the scene.