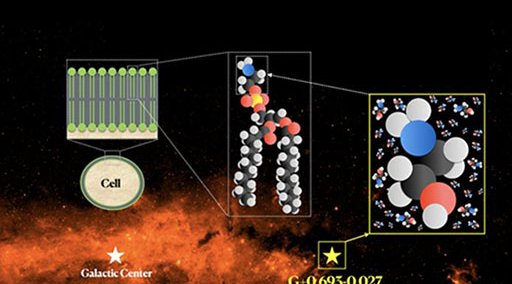 The molecule and where it was found in space. Image: La Moncloa

A Spanish team of scientists and the National Geographic Institute (IGN) have discovered ethanolamine, one of the components of the molecules that make up cell membranes and a key building block for life, in interstellar space.

The appearance of cell membranes represents a fundamental milestone in the origin and early evolution of life on Earth, since they are responsible for maintaining stable conditions inside cells, protecting both genetic material and metabolic machinery.

This first detection in space of ethanolamine (NH2CH2CH2OH), a molecule that contains four of the six essential elements for life, will help to understand how the first cell membranes could form. The highly sensitive radio telescopes at the Yebes Observatory in Guadalajara, equipped with a Nanocosmo receiver, have been crucial in the finding along with the Institute of Millimetre Radio Astronomy (IRAM) in Pico Veleta, Granada.

This finding of enormous importance for astrobiology has been made by an international and multidisciplinary scientific team of astrophysicists, including astronomers from the National Geographic Institute, and of astrochemists and biochemists. It was led by Victor Revilla, a researcher from the Astrobiology Centre, and has been published in the journal Proceedings of the National Academy of Sciences.

The prebiotic molecule was found in a molecular cloud called G+0.693-0.027. located near the galactic centre.

The finding opens the to the future detection of increasingly complex molecules in space that could give rise to the three basic molecular components of life: lipids, RNA and DNA nucleic acids, and proteins.