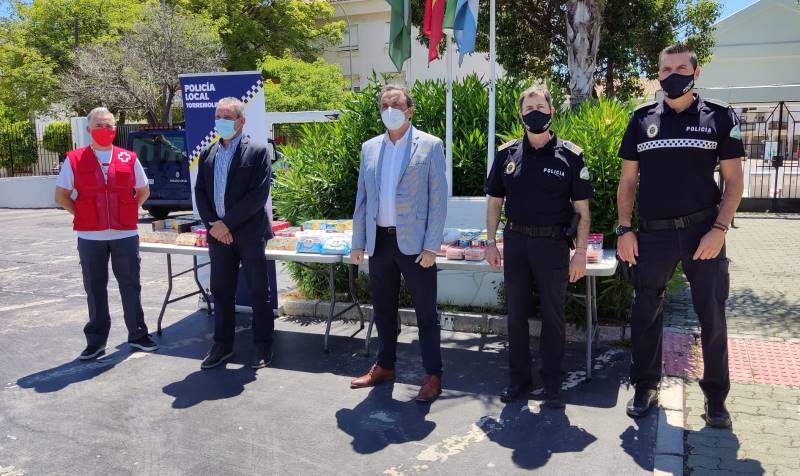 Presentation of the food and other items Credit: Torremolinos Council

LOCAL POLICE in Torremolinos have collected 200 tons of food and hygiene items and donated them to the Red Cross to give to homeless people in the municipality.
The mayor of Torremolinos, José Ortiz, the Security councillor, Antonio Ruiz, and the Chief Commissioner of the Local Police, José Miguel Ávila, attended the donation ceremony on May 28.
The mayor observed; “this donation is one more example of the solidarity and commitment that our local officers have, every day in their work they have to deal with the most disadvantaged of Torremolinos, their work it is fundamental for these people and logically the situations they see hurt them.
“I want to congratulate both the Local Police and the Red Cross for this magnificent initiative, this health crisis has been very hard for many people, but especially for those who do not have a home.”
For his part, the head of the Local Police, José Ávila, said; “we do surveillance and security work, which are very necessary for the coexistence of the municipality, but we also have other functions, which are perhaps less visible for the citizens of Torremolinos, but they are also very valuable. Torremolinos can congratulate themselves on having a highly committed Local Security body.”
The idea for the collection came about during the worst months of the pandemic in 2020, when the Local Police accompanied the Red Cross volunteers in their various humanitarian activities.
Representatives of the charity told accompanying officers that they needed food especially for people who did not have the possibility to cook so the Police Headquarters became the centre of a campaign to collect money and later officers purchased the items suggested by the Red Cross.