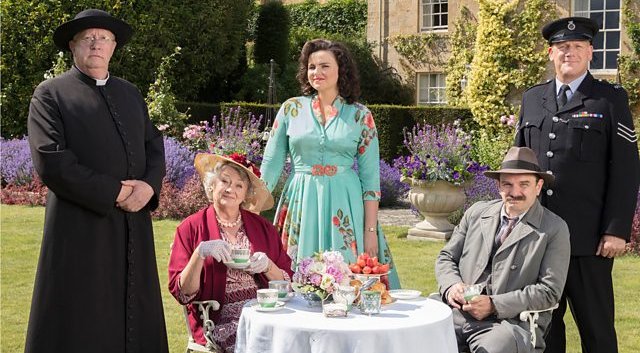 The much-loved BBC day time drama is filming its 100th episode amid global acclaim for the series.

Father Brown is based on the stories by GK Chesterton about a crime-solving Roman Catholic priest played by Mark Williams, who has previously starred in Harry Potter and The Fast Show, who once again resumes his role. The new series will air in early 2022 on BBC One daytime.

Mark said, “We love telling our stories as much as the world loves watching them. A modest, warm daytime drama that achieves one hundred episodes and global success. Who’d have thought it?”

The 100th episode, The Red Death, will see Lady Felicia and her husband Monty host a lavish masked ball counting down to 1954. However, their plans are ruined when the Minster of Defence, Sir Charles Hakeworth is murdered by a masked figure. With the estate locked down and a killer in the midst Father Brown and the gang must find the real perpetrator. Guest cast appearances in the 100th episode will include Richard Dillane (Sir Charles Hakeworth) Alexander Hanson (Lord ‘Monty’ Montague), Gemma Page (Lady Agnes Hakeworth), Caleb Frederick (Dr Elliot Muthomi), Nicholas Audsley (Robert Earl of Finchmore) and Cam Spence (Ruth Moulton).

Father Brown, which first aired on BBC daytime in 2013, is now a global success and broadcasts in over 232 territories around the world, including on primetime in the USA.

Carla-Maria Lawson, Head of Daytime & Early Peak, said, “Father Brown’s canny observations and remarkable powers of sleuthing continue to thrill not only BBC daytime viewers but audiences around the world, who find the themes in the series just as relevant today as they were in GK Chesterton’s time. We’re delighted to be bringing more of his adventures to screen soon.”

Will Trotter, Executive Producer for BBC Studios, added, “It’s an incredible achievement to get to 100 episodes. The much-loved show goes from strength to strength.”

Series nine will air on BBC One daytime in early 2022.