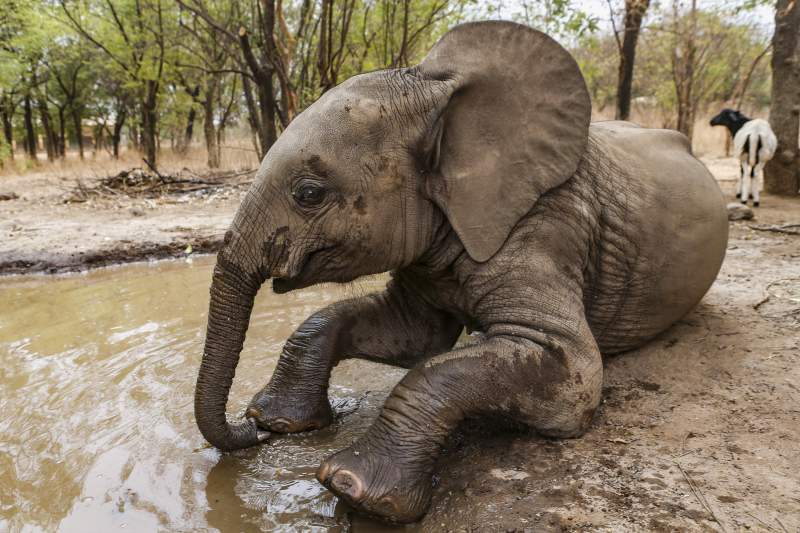 Nania was rescued by local community members when she was just three months old. Image: IFAW

The elephant, named Nania, was rescued by local community members when she was just three months old. The International Fund for Animal Welfare (IFAW) was approached to provide long-term support for her rehabilitation and release back to the wild.

There are only a few dozen elephants who live in the national park and IFAW’s Country Director for France and Francophone Africa, Céline Sissler-Bienvenu, is certain her natal herd migrates through the park. In fact, results from the analysis revealed this elephant -very likely to be Nania’s mother – had walked near Nania’s enclosure.

“A parent should share 50 per cent of its alleles [genes] with its daughter… So really what we’re trying to do is see in any of these family groups, do we have a parent-offspring or a full sibling or a half-sibling to Nania,” said Sam Wasser, Director of the Centre for Conservation Biology at the University of Washington.

In an effort to verify Nania’s herd through a familial match, IFAW collected DNA samples from both Nania and wild elephants travelling through Deux Balé National Park. The 17 samples were safely transported to the United States where they were analysed by researchers from the University of Washington. The results provided exciting revelations.

First, the analysis noted the DNA sample results from one of the elephants indicate this elephant is likely her mother or less likely, a half-sibling.

“I was overwhelmed by a strong emotion. All indications are that Nania’s mother is alive! The fact we’ve potentially found not just her mother but also, in all likelihood, her grandmother and aunt is incredible and really exciting,” said Sissler-Bienvenu.

Secondly, the analysis confirmed that Nania is a critically endangered forest elephant, which crucially clarifies what species of elephant she belongs to. In March, her species (Loxodonta cyclotis) was recognised by the International Union for the Conservation of Nature (IUCN) as independent to the Savannah elephant (Loxodonta africana) making her even more important to the future survival of forest elephants.

Currently, there are an estimated 6,800 wild elephants in Burkina Faso and the surrounding region. In the coming months, IFAW will conduct a census of the elephant population in Deux Balé National Park to better understand the few elephants who call this region home. Nania continues her rehabilitation journey, learning the survival skills she will need for life in the wild. Currently, Nania is cared for by a group of four keepers in Deux-Balé National Park, Burkina Faso.

“This is the first known attempt to successfully reunite an African elephant calf with its wild herd using DNA analysis,” said Sissler-Bienvenu.

“Her successful release back into the wild holds the potential for strengthening the population of wild forest elephants in Africa, helping them thrive into the future and affirming IFAW’s approach that every individual animal matters.”