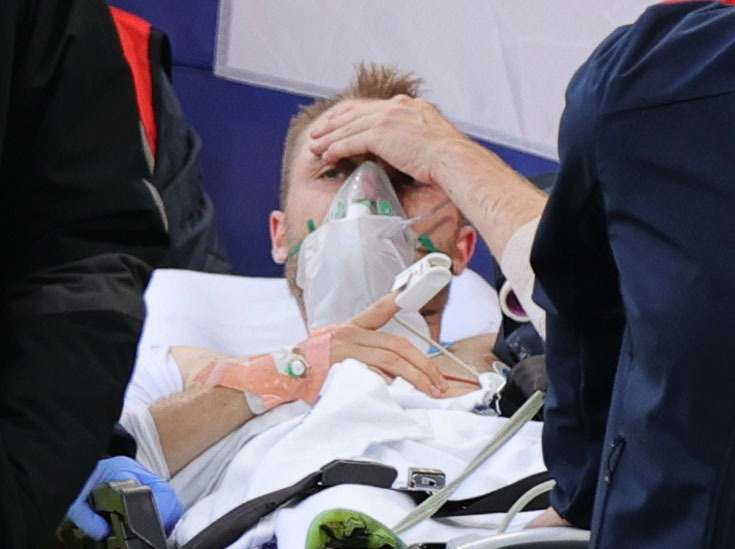 Eriksen went down during the opening half of the Group B match and required extensive medical attention on the pitch before he was removed on a stretcher.

After Eriksen was taken to the hospital, UEFA sent out word that his condition was stable. The Danish FA also confirmed that Eriksen was awake and undergoing further tests. The game was initially suspended before it was later restarted after a delay of more than 90 minutes, with Finland winning 1-0.

UEFA provided the first update on Eriksen’s status, saying in a tweet: “The player has been transferred to the hospital and has been stabilised.”

The Danish FA also sent out a tweet saying: “Christian Eriksen is awake and is undergoing further examinations” at the hospital.

Eriksen’s agent Martin Schoots told Dutch radio station NPO Radio 1 that Eriksen was awake, saying: “I’ve been in contact with his father for a while and he says that Christian is breathing and can talk, that’s the good news. He is conscious, but everyone is in shock. His girlfriend is with him.”

Play came to a halt just before half-time as Eriksen, without any players around him, dropped to the ground. Referee Anthony Taylor immediately blew his whistle and brought the match to a halt and called for the medical staff, who raced onto the pitch to administer treatment.


His Danish team-mates formed a shield around him as the medics provided treatment before white sheets were held up around him to provide privacy.

Following several minutes of on-field treatment, UEFA announced that the match was suspended. The European governing body said just over an hour later that following a request from both teams’ players, the match would be resumed.

Former Bolton Wanderers midfielder Fabrice Muamba said that Eriksen’s collapse brought back painful memories of his cardiac arrest on the pitch in an FA Cup match in 2012.

The ex-England under-21 midfielder had to retire soon after at the age of 24.

“It brought back stuff that I have put down in me, this emotion that’s down there. To watch it from that distance and not know what was going to happen,” Muamba told the BBC.

“It was scary, but credit to the medical staff. They have done an amazing job on Christian. I like how his team mates got together to protect him. I hope things turn out to be OK for him. I hope he will come through.”