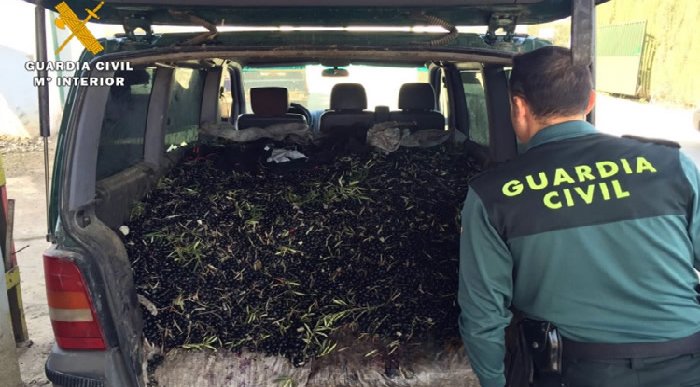 Guardia Civil officers operating checks on the movement of olives during the 2020/2021 olive season, have investigated six individuals aged between 25 and 32 – most of them with previous criminal records – in the municipality of Adamuz in the province of Cordoba, suspected of the crimes of misappropriation and documentary falsification.

This investigation came as a result of one of the ROCA Teams that operated in the central area of ​​the province carrying out a check to inspect the purchase of olives and oil mills located in the towns of the Alto Guadalquivir region, checks which are always done to prevent olive theft and control its traceability.

As a result of these inspections, officers detected numerous deliveries of small quantities of olives made mainly by people of foreign nationality at various olive buying positions located in the towns of Montoro and Adamuz, where in many cases the accompanying documents were incomplete or poorly prepared, and thus in breach of standard regulations.

In some previous cases it had been discovered that documents were presented with personal data of farmers who had supposedly authorised the olives to be collected from their farms, but something which was subsequently found to not be true, with the farmers having no knowledge of the collection or documentation they had supposedly signed.

Whilst verifying one of these documents, officers intercepted three vehicles at an olive checkpoint in Adamuz, all travelling together, occupied by foreign nationals, and were presented with DAT documents that supposedly came from a farm in Écija, Sevilla, and were signed as such by the farmer.

A quick communication with the farmer established that he had not authorised this shipment to be collected, and had not signed any document, at which point the ROCA team officers took the six occupants of the vehicles into custody, charged with suspected misappropriation and falsification of documents, and the Guardia Civil seizes the total load of 9,408 kilograms of olives that were being transported in the three vehicles, as reported by lavozdecordoba.es.