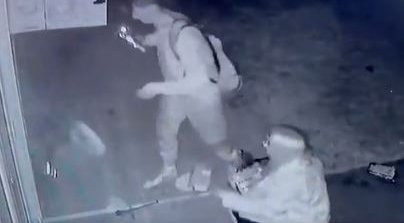 Shocking footage has been released as vandals smash a Football Club’s defibrillator only hours after Christian Eriksen’s Collapse.

A man and woman have been caught on CCTV by Buxted FC in East Sussex as they vandalised a defibrillator kit at the club only a few short hours after Christian Eriksen collapsed during the Euro 2020 tournament.

The incident occurred on Sunday morning in the early hours and the incident has been described as “absolutely disgusting” by Buxted FC in East Sussex. They have released the footage on Twitter in a bid to help find the suspects involved in the act of vandalism.

Speaking to the PA News agency, Club chairman Richard Turner commented that: “Those things save people’s lives and someone has come and trashed it.

“The whole world saw what happened to Christian Eriksen on Saturday so why would anyone think that’s OK?

“Everyone at the club is a volunteer, we work hard for what we’ve got, but now we’ll have to raise funds to replace it. It’s just heartbreaking.”

A defibrillator was used to save Christian Eriksen according to the Denmark team doctor.  Eriksen suffered a cardiac arrest mid-match and collapsed on Saturday afternoon.

Martin Boesen, commented on using the defibrillator and said that: “How close were we to losing him? I don’t know, but we got him back after one defib, so that’s quite fast.”

According to the football club the vandals made their attack at 12.50am on Sunday. They took to Twitter to release the footage and explained that:  “It was caught on CCTV so if anyone has any information about who these two people are then please report it to Sussex Police.”

Actor Martin Kemp has been angered by the footage and explained that: “I rarely get upset, angry or surprised by people’s behaviour but this is the pits. I hope they will be disgusted with themselves when they get caught.”