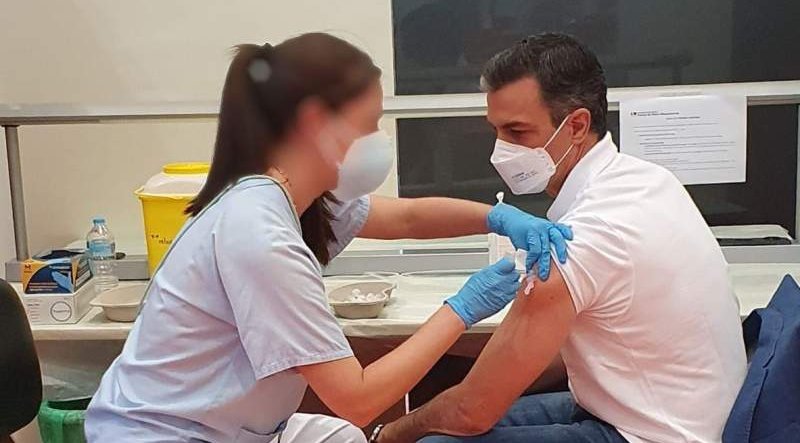 Sanchez posted the news on his Twitter account, he said: “Vaccines save lives and are paving the way for us to recovery. They are our horizon of hope,” although he has not revealed what type of inoculation he received, Pfizer, AstraZeneca, etc.

This morning, Sánchez highlighted the rate of vaccination in Spain in an intervention at the Cercle d’Economy in Barcelona. The president also announced today that masks will not be necessary after Saturday, June 26, although this has to be approved by the Spanish Parliament, it is understood to be a foregone conclusion that it will fly through congress.

Spain’s Prime Minister Pedro Sanchez, now 49, was vaccinated with the vaccine that corresponds to his age group. The Ministry of Health added 4,214 infections this Friday and reported 18 deaths to the official count, bringing the total number of cases in Spain to 3,757,442 and the number of deaths to 80,652 since the start of the pandemic, according to official data.

A total of 31.6% of people in the 40-49 age group in Spain have received at least one dose of a Covid-19 vaccine. Of Spain’s 17 regions – which are in charge of the vaccination drive – only Madrid, the Basque Country and Castilla y León have immunized fewer than 20% of this demographic. Since the inoculation campaign began last December, Spain has administered more than 33 million doses, and 45.3% of the entire population – 21.4 million people – have received at least one shot (more than 53% of the over-16s – see graph below).

The incidence rate drops below 100.

Spain’s cumulative incidence remains stable at 96 cases per 100,000 inhabitants over 14 days. The coronavirus incidence rate in Spain is now at its lowest level since August 2020.

This is the first time the incidence rate has fallen below 100 cases since August 12, when it stood at 96. At that time, the second wave of the coronavirus was starting to take shape and transmission rates were rising.