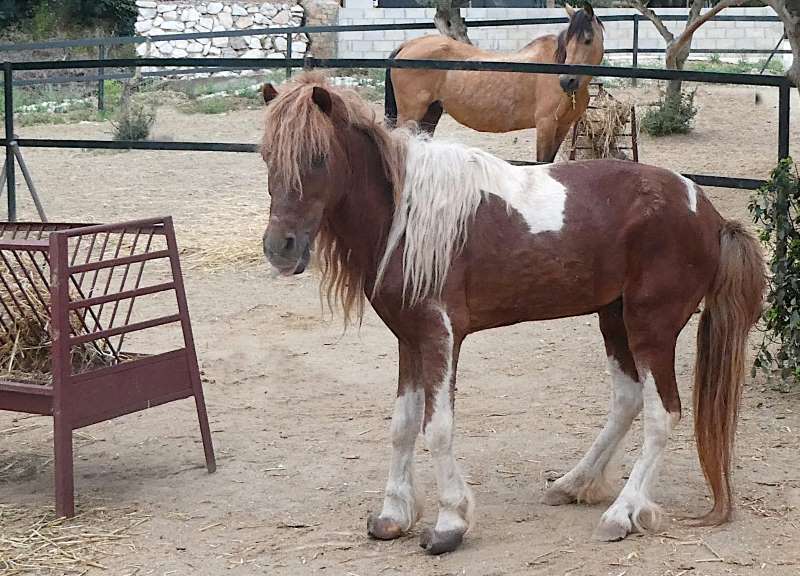 Sadly, Lucero was rescued too late and had to be put to sleep Credit: ARCH

There was a landmark victory for animal rights thanks to ARCH Alhaurin el Grande as the Andalusian Rescue Centre for Horses charity helped in a major case.
In January 2019 ARCH were called by Guardia Civil animal welfare branch Seprona, along with “El Refugio de Burrito” and “Caballos Luna”, to assist in the rescue of a number of horses, donkeys and mules from a horse dealer in a small town north of Malaga.
Live animals were living with dead and dying ones in appalling conditions.
In pitch black and freezing conditions, by the lights of heavy machinery – a digger was needed to get the animals out – the attending vet likened the scene to Dante’s Inferno.
Over two years later, the case finally came to court in Malaga, and justice has caught up with the former owner.
Thanks to the tenacity of ARCH’s animal right lawyer Aritz Toribio and a caring judge, who was well informed on the new animal rights legislation, he has now been prohibited from keeping, or having anything to do with animals for eight years.
In addition, he has to pay the charities involved their costs over two and a half years, with a heavy jail sentence if he defaults.
The lawyer commented that “This is the most important ruling prohibiting the ownership of animals ever seen in Spain. We should be proud to have achieved it.  Thank you ARCH and The Refugio del Burrito for your work and dedication. Even though we encounter many setbacks in our fight again animal cruelty, we should focus on all the animals who have, and will continue to have, a new life thanks to us.”
ARCH took in three small ponies from the rescue which had not been there long, and their condition was not giving cause for alarm.


The trio, who were given the names Dinky, Dusty and Gucci spent several months at the Centre until permission was given to allow them to go into foster homes. All three have thrived and it is likely that they now will be officially adopted by their foster families.
ARCH have revealed that they have been involved in some truly heart-breaking cases of neglect and abuse.
Sadly, they are sometimes involved when it is too late to save the animal involved. Only recently they took in a small pony called Lucero, who had received no care for years and was suffering so badly from chronic laminitis (which meant he could not walk) that the vets could only advise them to put him to sleep and end his suffering.
The charity will be pursuing prosecution of the owner but sadly, it can take many months, and even years for the cases to come to court but, hopefully it may be less of a struggle now the new legislation has been seen to take effect.
To learn more about ARCH and the horses and donkeys they have rescued, follow the charity on their Facebook page – Centro Andalusi de Rescate de Caballos – or go to their website www.horserescuespain.org or visit on a Sunday.
Thanks for reading ‘Landmark Victory for Animal Rights thanks to ARCH Alhaurin el Grande.’