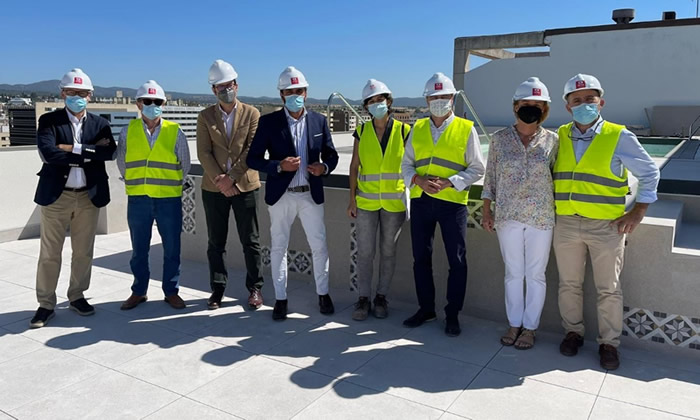 Ángel Pimentel, the territorial delegate of Tourism of the Junta de Andalucia in Cordoba, visited the sites on Thursday June 24, of two new hotels that the Cordovan capital is planning, located in strategic expansion areas of the city, and which between them will add an extra 300 beds to the hospitality sector of the area, with both hotels being built in line with the classification of the new hotel decree.

“Cordoba is an interesting and attractive destination for investors who, even in this context of crisis, have been encouraged to bet on our province and create new accommodation options that come to join and strengthen the Cordoba offer,” said Ángel Pimentel.

Sercotel is the chain that will be operating the Hotel Las Delicias, one of these two new four-star category hotels – their first establishment in the capital – with an investment of €4 million, comprising 129 rooms, including two suites, a gym, a restaurant, and a swimming pool and solarium area.

The promotor of this construction is Cordoba company Alquirosan 2007 SL, and it will be built by Corduba Constructionis SL, with the work scheduled to be completed by the end of the second quarter of 2022, and a plan to open that same September.

Soho Hotels – which already have another hotel in the city, as well as other cities in Andalucia – will operate the second four-star hotel, on Calle Fernando de Córdoba, with a construction investment of €5 million, and more than €450,000 in equipment, having 182 rooms, including four junior suites, along with a gym, restaurant, swimming pool, and solarium area, and it is forecast to be completed this June, and open in time for this summer.

Mr Pimentel pointed out “the importance for the tourism industry that these new hotels have not only now in their construction phase, but also later when they come into operation. Without a doubt, tourism continues to be a fundamental engine for the province’s economy and a source of wealth and key employment,” as reported by lavozdecordoba.es.