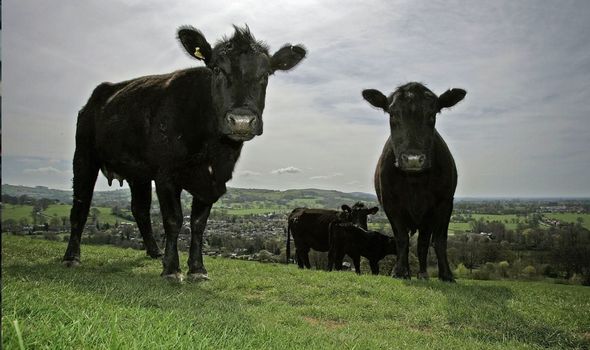 BRITONS have reacted furiously after the EU has revealed plans to lift a ban on what is believed to be dangerous farming methods that are outlawed in the UK.

A ban on farm feed made of animal remains is to be lifted in the EU despite being outlawed in 1994 amid fears over the spread of a deadly virus. The first case of BSE (or bovine spongiform encephalopathy) was reported in 1986 in the UK. The disease was spread widely by farmers feeding cattle with the meat and bone meal of dead and infected animals.

More than 4m cattle were slaughtered in the UK and 178 people died after contracting the human variant, Creutzfeldt-Jakob disease, understood to be passed along by consuming infected beef.

Following the EU’s persistent calls to adhere to a level playing field for standards throughout Brexit negotiations, Britons reacted with fury over the recent hypocrisy from Brussels.

After being backed by member states, farmers will now be able to use cheap pig protein to be fed to chickens despite the fears of bovine spongiform encephalopathy or Mad Cow Disease.

The use of processed animal protein in the feed of cattle and sheep was outlawed by the EU in 1994. The use of the feed helped spark a crisis in the disease which spread rapidly across the UK where four million cattle were slaughtered as a result.

A further 178 people also died after contracting the human variant of the disease which is passed by consuming infected beef. Although the UK has left the EU, it will continue the ban on processed animal protein being fed to livestock on farms across the country.