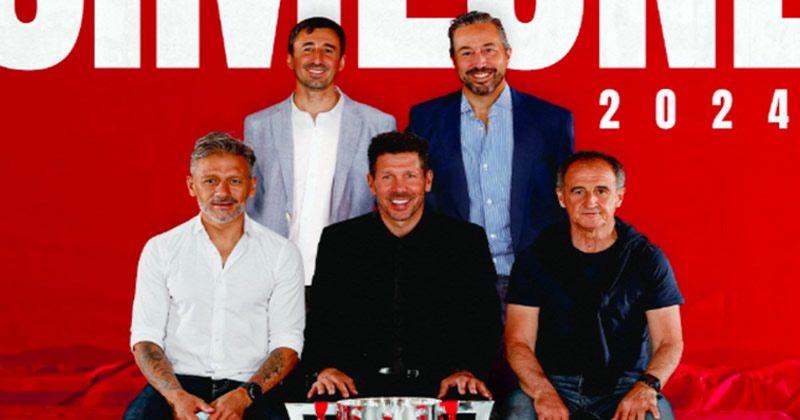 Diego Simeone, Atlético Madrid’s Argentinian head coach, reinforced his commitment to the rojiblanco club on Thursday 8 by signing the renewal of his contract for two more years, which will take him, and his current coaching staff, through until June 30, 2024.

Simeone’s new deal was signed in the Wanda Metropolitano stadium in Madrid, and announced publicly on Thursday by the club, with his current contract not due to expire until 2022, but after yet another massively successful season it seems he is still happy at the club, after nine and a half years in Madrid, since his arrival in December 2011.

In a mass renewal, all of his backroom team also signed new contracts, according to the Madrid club on its website: they have also renewed Óscar Ortega, physical trainer; Pablo Vercellone, goalkeeper coach; Nelson Vivas, second coach, and Hernán Bonvicini, third coach.

Last season saw his team win the LaLiga Santander title by the narrowest of margins, after a tense final day in which both Madrid clubs were in with a shout at the title, Simeone’s eighth trophy in nine years of a memorable era for Atlético, and now, surely, his ambition has to be the climb to winning the ultimate club competition in Europe, the Champion’s League, a trophy that has so far eluded the club, only managing to be runners-up on two occasions.

Atletico’s success is undoubtedly down to the way that the former Argentinian international handles the day-to-day running of his team, designed and picked exclusively by him, and clearly, the hierarchy has no intention of changing this winning formula.

Capped over 100 times for Argentina, and appearing in three World Cups, he also played for Atletico, winning a glorious double in 1996, as reported by diariodealmeria.es.