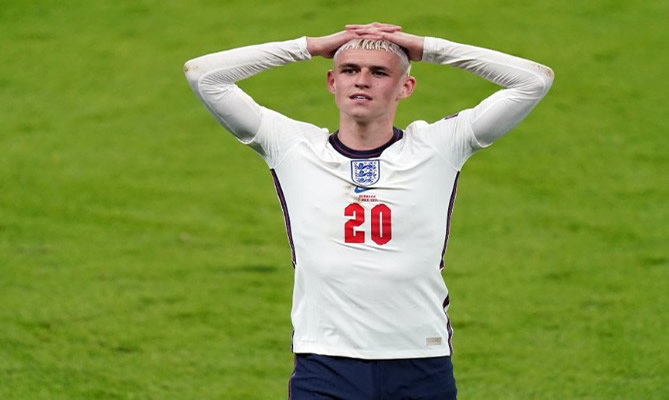 Phil Foden looks destined for Euro 2020 heartbreak after what was reported to be a ‘minor knock’ that he picked up yesterday, Friday 9, in training, which left him sitting out the rest of the session, and the 21-year-old remains a doubt for the Wembley final on Sunday, according to The Sun.

Foden did not train with the rest of the squad today, and, although he was probably going to start the final on the bench, the young Manchester City star could now reportedly miss the Italy clash completely.

He lost his place in the starting eleven for the Denmark match to Arsenal’s Bukayo Saka, with Gareth Southgate seemingly preferring to bring Foden on from the bench, but now, the door opens for new Manchester United signing, Jadon Sancho, to try and make his mark in this final.

The injury to Foden’s foot is not serious, and he should be back ready for City’s pre-season training, as they prepare for another defence of their Premiership crown, of which the young player is an integral part.

In some better team news, all of the Three Lions squad passed the mandatory PCR tests insisted upon in the Eufa directive, but there had been rumours yesterday of reported positive cases among three of Italy’s backroom staff, with the players allegedly being kept in a more secure bubble as a result.

England’s players go into Sunday’s final against Italy knowing they stand to make a slice of history if they can become the first England team to win a major trophy since the 1966 match with West Germany.

Phil Foden, Ben Chilwell and Jack Grealish not letting it touch the ground ✨