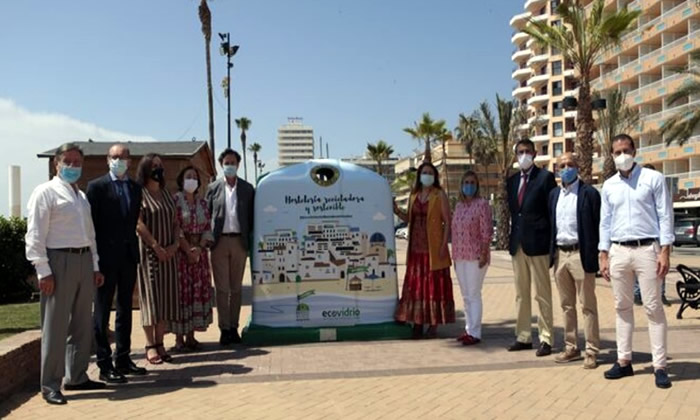 Ecovidrio, the non-profit-making entity in charge of managing the recycling of glass container waste in Spain, on Friday 9, presented representatives of Malaga province with its newest edition of the ‘Green Flags’ initiative.

This initiative aims to reward the efforts of more than 4,300 hotel establishments in the region, from 41 coastal municipalities in Andalucia, for sustainability during a summer marked by the recovery from the Covid-19 pandemic, and the 41 participating towns of Andalucia will try to snatch Ecovidrio’s Green Flags away from Almuñecar and Marbella municipalities, who won them after the previous campaign.

This initiative was presented in Fuengirola, in an event that had the participation of Carmen Crespo Díaz, the Minister of Agriculture, Livestock, Fisheries and Sustainable Development of the Junta de Andalucía; Norberto del Castillo, the President of the Spanish Federation of Beach Entrepreneurs, and Félix Reneses, the Director of Management and Key Accounts of Ecovidrio, and also in attendance was Ana Mula, the Mayor of Fuengirola.

As Ecovidrio presents its Banderas Verdes (Green Flags) campaign, it is one of the key initiatives of their alliance with the hospitality industry and the need for a green transition, and at a national level, this campaign is being carried out in 129 coastal municipalities, in five different autonomous communities, with the participation of around 14,000 hotel establishments.

This campaign has the uniqueness of involving local councils, as well as restaurants, bars, beach bars, and catering establishments in general, in a campaign that aims to raise awareness about the importance of recycling, and the separation and selective collection of glass containers, as the hospitality sector has been shown to generate around 52 per cent of single-use glass containers.

With a human team deployed throughout the area, the entity will visit the hotel establishments to inform them about the campaign and encourage participation, and in addition, it will monitor the filling volumes to adapt the collection routes if necessary.

A specific scoring system has been established, with criteria such as:

The increase in the volume of selective collection of glass containers compared to the previous year.

The percentage of participating local hospitality and their collaboration to achieve the objectives.

The commitment acquired by the local councils to promote the campaign among the hospitality industry and to disseminate it to the public and visitors.