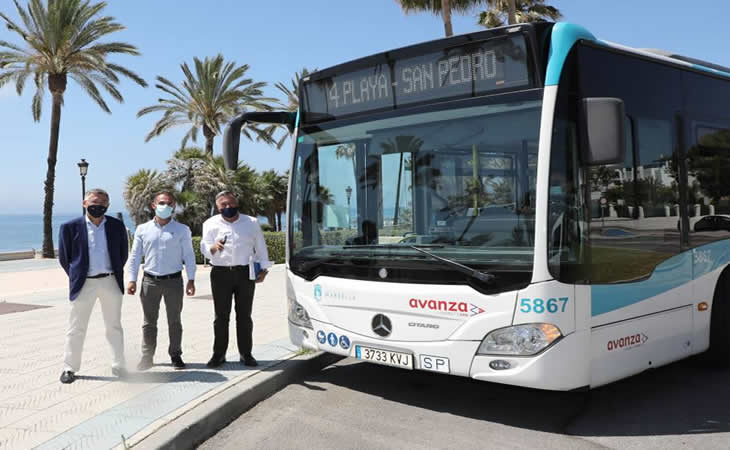 Javier Garcia, the deputy mayor of San Pedro de Alcantara, accompanied by councillor Enrique Rodriguez, on Friday 9, launched the initiative by the Town Hall, through the municipal delegation of Traffic and Transport, that for the second year running, will transport residents and tourists closer to the beautiful beaches of the municipality.
Through the expansion of the urban bus Line 4, which runs from Puerto Banus to Nueva Andalucia, and finally, to San Pedro, the service will operate 16 times a day, at 40-minute intervals, from 10.30am to 8pm, and will incorporate seven new stops, through until September 15.
Mr Garcia announced, “It was a highly demanded request that will improve the quality of life of citizens”, while emphasising the importance of “facilitating access from the urban centre to the coast, which is only one kilometre away”, and with the extended service it is designed to allow less use of personal transport, with the focus being on using the urban buses as a main form of transport instead.
The deputy mayor recalled that “in previous years a similar service was provided by a tourist bus, but last year we bet on doing it from our urban transport, and within the ordinary routes”.
Mr Rodriguez also explained that the urban bus users can benefit from the free service thanks to the Mobility Card, while pointing out the improvements that are constantly being made to the local urban network of services, “with milestones as important as the start-up in San Pedro de Alcantara of the new Line 13 (formerly L78), which is already providing a service, and which will see its hours extended at the end of this month”, as reported by 101tv.es.