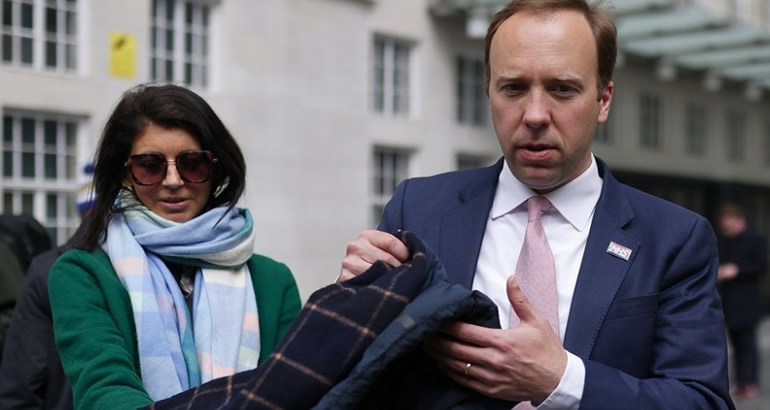 MATT HANCOCK CCTV raids of two houses in the South of England cause a huge backlash from MP’s, campaigners, and members of the public

Two properties in the South of England were reportedly raided on Wednesday evening (July 14), by the Information Commissioner’s Office, in a search for evidence relating to the leaked CCTV footage that led to the scandal surrounding former Health Secretary Matt Hancock, and his subsequent resignation, after the affair with Gina Coladangelo became public. knowledge after The Sun revealed the affair.

Computers and phones were allegedly among the items seized during the two raids, but now, MP’s, campaigners, and members of the public have branded this action to try and find the alleged whistle-blowers a danger to the free press, accusing the ICO of a massive overreaction, while being likened to the former East German Stasi, as they carried out their investigation under the Data Protection Act.

Voters living in Mr Hancock’s Suffolk constituency had agreed it was correct that he had been shamed, with one reportedly saying, “The whistleblowers should be getting medals for this, not feel like they could end up in trouble for their actions. We are meant to live in a free society, this is the kind of move you’d expect from a government in China or North Korea”.

With the man adding, “Hancock is not popular round here, and this latest move won’t do him any favours if he’s trying to get people back onside”.

Britain’s most senior lawyer had said the revelation was definitely in the public’s interest at the time, and now, according to The Sun, there has been a huge backlash against the raids, as Conor McGinn, Labour’s Shadow Security Minister claimed, “This story was clearly in the public interest. Any illegality must be investigated, but we need to ensure that whistleblowers can continue to play their vital part in keeping organisations accountable”.

Sir Ed Davey, the Lib Dem leader,  said, “The Sun were right to publish these photos, they were clearly in the public interest. The Sun is also absolutely right to protect its sources,

Julian Knight, the Conservative MP and boss of the powerful Commons Culture Media and Sport Committee said, “I can’t comment on an investigation in progress, but freedom of the press and their ability where necessary to act in the public interest is a cornerstone of our democracy and we endanger it at our peril”.

While Sam Armstrong, of the Henry Jackson Society think tank commented, “If a national security leak has indeed been ruled out by police as it looks like, this is nothing more than a heavy-handed attempt by a bureaucratic agency to intimidate the source of a story in the public interest”.