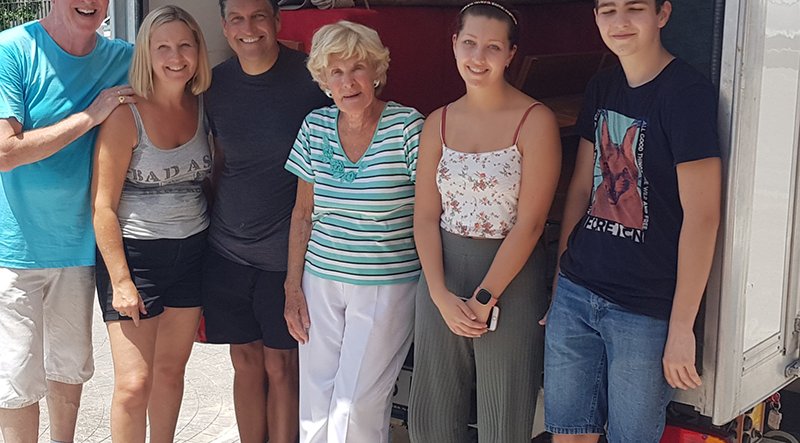 Sylvia is returning to the UK.

The International Music Society, T.I.M.S, was formed in 1988 and Sylvia Griffiths stepped in as Accompanist to help them out in early 1990. She was happy to do this as it was temporary but she stayed 23 years as Accompanist and also as Musical Director and President during some periods. “There is nothing more permanent than temporary” as the saying goes!! Her husband Arthur also served as President at one time.

The first programme I have is for a choir concert in March 1990, possibly Sylvia´s first concert accompanying the choir, and in another programme from 1992 it lists Sylvia as Musical Director and Arthur as Compere.

In the early years T.I.M.S had both a children´s and an adult choir and Sylvia and Arthur played a big part in putting on a production of the musical “Oliver” at the Salon Varietes Theatre using the children´s choir as Fagin´s Gang.
Sylvia also regularly took a cabaret singing group from The International Music Society to hotels to perform for tourists.

Sylvia worked with several Musical Directors over the years and in the 2000´s notably for about ten years with Brian Morton. She accompanied the choir in concerts in many venues along the coast and also at special ecumenical church services for Lux Mundi, including a wonderful yearly service at Malaga Cathedral.

In 2013 Sylvia decided it was time to retire and her last official concert with T.I.M.S was on April 21st 2013 at the Salon Varietes Theatre. This was followed the next evening by a lovely farewell from T.I.M.S to her and Arthur at Valparaiso restaurant in Mijas.

Sylvia, however, missed playing for the choir and returned to us to help out at rehearsals and later some concerts. She was our accompanist for our wonderful 30th Anniversary Concert on November 22nd 2018 and it was good to have her with us for that special occasion.

She was still working with us for two concerts in March 2020 when the first Covid lockdown came into force and the concerts had to be cancelled.
Sylvia Griffiths, you will be greatly missed by us all at T.I.M.S and we can´t thank you enough for all your years of commitment to the choir and your wonderful playing.
Margaret Williams Musical Director
and Gilly Bareford President

Long time theatre director Peter Mitchell shares just a few memories of Sylvia:
I first met Sylvia in March1992. She introduced herself and said she was President of T.I.M.S (The International Music Society) and that she had enjoyed the show I had just directed.T.I.M.S were in the middle of producing “Guys And Dolls” with Sylvia as Musical Director but she felt the show needed staging .I was going back home to Cambridge for the summer but worked on the show for three weeks, saw the Dress Rehearsal and flew home the next day. However, that was the start of a wonderful friendship that has lasted for over thirty years.

By the time  we came back to Spain, Sylvia had started a youth choir which was a great success and told  me that T.I.M.S wanted to hire the Salon Varietes Theatre and would I consider directing the musical “Oliver”? For me it was the perfect choice as I had played the role of Fagin and knew the show backwards.

Sylvia was amazing. She secured the performing rights and all the rehearsal material and when I gave her the plans for the set (which included three enormous units which had to be moved around by the cast) Sylvia’s husband Arthur found a huge ‘local’ for hire so the set was built there and completed in a month. We then had two weeks during which we could rehearse with the set. Peter Height choreographed the show and reheased the men moving the scenery as well as playing Bill Sikes.
A few days before  the show opened everything was dismantled and rebuilt in the theatre. The show opened to a capacity audience and Sylvia organised a champagne reception attended  by the Lady Mayoress of Fuengirola and her party who stayed after the show to be photographed with the cast.

In March 1994 I played the Pirate King in “The Pirates Of Penzance”. On opening night, in the middle of the first Act, I stopped  the show and said: “Madam M.D., you are conducting  this too slowly, please hand  over your baton”, which I then snapped in half and threw into the orchestra pit! I was then told off by the leading man who duly gave Sylvia a new baton.  This happened every night until as I came  to take the baton the entire audience put their instruments down and to Sylvia’s surprise all drew swords, threatening me to leave her baton alone and then the show continued.

In October 1994, in my favourite musical “Showboat”, I said to Sylvia: “You are going to be busy with the harmonies, we have a cast of fifty-eight!!”. The theatre hired a caravan parked close to the Stage to accommodate extra dressing  rooms for the men to get made up and changed. Happy days!

Altogether with Peter Height, Sylvia and I have worked together on at least 28 shows. Congratulations Sylvia and thank you for all your dedication, hard work and friendship.
Oh, by the way, Sylvia’s favourite show is “The Full Monty” (I can’t think why!).

We wish Sylvia and her husband Arthur all the best for their life back in England. They will be sorely missed.