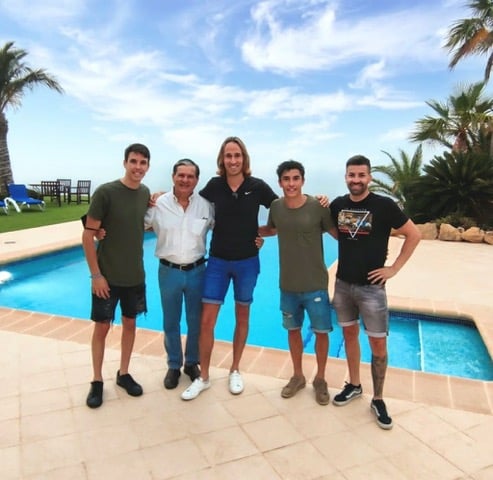 Rest period THE Marquez brothers Marc and Alex, with 10 world motorcycle championships between them, have once again been staying in Mojacar.  They have visited the town and its beaches for the last five years to relax and “recharge their batteries” before next season’s races, they explained.

Big prize THE Cuponazo draw organised by ONCE, Spain’s organisation for the visually-impaired, brought €25,000 each to 17 people who bought a coupon last Friday.  They acquired them in Huerca-Overa from vendor Teresa Farres, who usually sells tickets in the town centre and restaurants in the area.

Hard work A PUPIL at the SEK-Alboran school in Almerimar, Antonio Palomino, obtained a 45, the highest mark possible in the International Baccalaureate exams, regarded as the world’s most demanding and prestigious. “I worked and studied hard for a long time, and it wasn’t easy,” Antonio admitted.

No visits A DOCTOR was attacked and insulted at Vera’s primary care health centre last week after turning down a patient’s request for a home visit for a minor ailment.  The irate family member who later burst into the health centre now faces legal proceedings from Andalucia’s Health Service (SAS).

Green future THIRTY members of the Partido Popular’s Nuevas Generaciones youth section have cleared rubbish and litter from Vera’s El Salar de los Canos wetlands.  The initiative reflected their “clear commitment” to the environment, the circular economy and a green future, said the PP’s Infrastructure and Mobility vice-secretary for Almeria.

Swotting up A TOTAL of 7,370 people have visited Roquetas’ public libraries since restrictions were eased in May and June and the centres resumed their normal activities. This included extending opening hours during the exam period when the study room was used by between 80 and 140 students each weekend.

Let’s go THIRTEEN people interned in Almeria’s Albergue Juvenil escaped on the same day last week.  The hostel accommodates migrants who test positive for Covid after arriving by sea or have been in close contact with a case.  Despite security guards, two left in the evening and 11 that evening.

Plant life CARMEN remains one of Spain’s most-often encountered names and a wholesale florist in Almeria suggested presenting the Carmens who  celebrated their Saint’s Day on July 16  with a “pet plant” instead of cut flowers.  With the right amount of TLC this would accompany them year-round, he said.

Lower bills CANTORIA, Cobdar, Olula del Rio, Purchena, Sierro and Urracal will economise on their municipal lighting bills by renewing streetlights and installing LED technology via the Diputacion’s Energy Efficiency Plan financed by the EU’s FEDER regional development plan.  This should bring savings of around €170,000, the provincial council predicted.