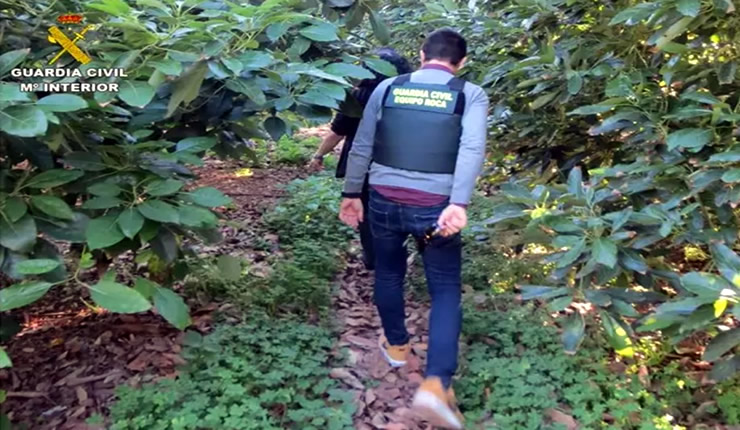 Six investigated in Alicante for theft of ton and a half of avocados. image: guardia civil

Alicante Guardia Civil officers have investigated six people over their alleged involvement in five crimes of the theft of a ton and a half of avocados, committed in different agricultural operations in the towns of Callosa d’en Sarria, Polop de la Marina, and Rafol de Almunia.
After discovering a significant increase in the reports of avocado thefts from farms in the Marina Alta and Baixa regions, Guardia Civil officers initiated investigations, during which they established that there were three separate gangs operating, carrying out thefts that amounted to around €6,000 euros in losses to the farmers involved.
In a statement, the ROCA unit of the Calpe Guardia Civil reported that during June and July their units had successfully carried out three open investigations to clarify several crimes of theft of avocados in the Marina Alta and Baixa regions.
Thanks to the relationship between local farmers and the ROCA units, at the end of last Winter, and into early spring, the officers detected a rise in crimes of avocado theft in the towns of Callosa d’en Sarria, Polop de la Marina, and Rafol de Almunia, with farmers reporting their concern about the threat to production.
In Callosa d’en Sarria, the investigators identified and located a group of residents who would have first-hand knowledge of the agriculture sector, knowing all the entrances and exits to all the local farms, and more importantly, known by the farm owners, so that their presence on any farm would not raise suspicion.
This group of three persons was soon found to have a modus operandi of travelling to the farms in a car, two of them would enter the field and fill as many bags as possible with the avocados, while the third stayed with the vehicle, then at the given signal he would return to the farm and help load the stolen goods, which were then later sold on the black market.
The three men, all of Romanian nationality, aged 22, 29 and 42, were charged with two crimes of burglary at the same farm, during which they acquired around 800kg of avocados worth around €2,000.
In Polop de la Marina, the investigations focused on a 48-year-old Moroccan man accused of two crimes of theft, for stealing 600kg of avocados of the Lamb Hass variety, which caused losses of €2,400 euros for the farmer.
Finally, in the municipality of Rafol de Almunia, a 54-year-old man and a 53-year-old woman, both of Ukrainian origin, who were engaged in beekeeping in places that were in the vicinity of avocado farms, were discovered to have cut through the farm’s fences to gain access to the fields and steal around 300kg of avocados, worth around €1,600, as reported by europapress.es.

Originally from Wales, Chris spent years on the Costa del Sol before moving to the Algarve where he is a web reporter for The Euro Weekly News covering international and Spanish national news. Got a news story you want to share? Then get in touch at [email protected]s.com