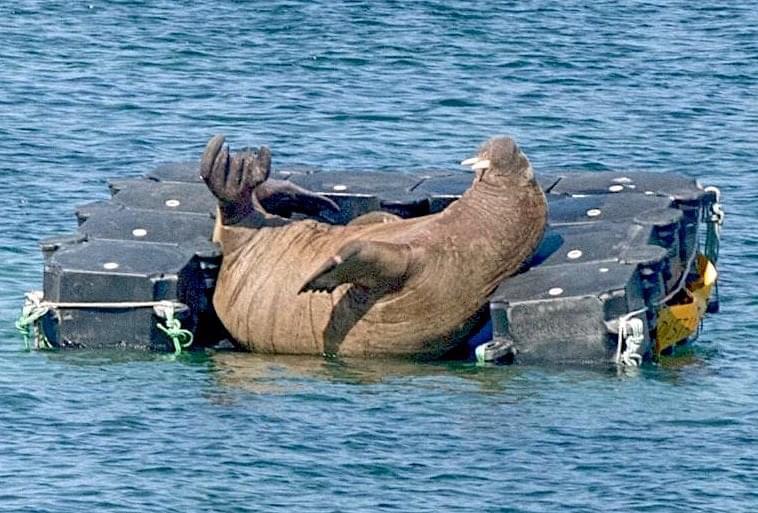 Tourists told to stay away from Wally the Walrus as he suffers in heatwave. Image - Twitter

A Walrus that has been delighting tourists with its cheeky antics has been struggling in the current UK heatwave.

Wally, the beloved yet mischievous Walrus, travelled from the North Atlantic Ocean to Ireland, Wales, Cornwall, France and is now on the Isles of Scilly has been struggling in the heatwave.

Wally #walrus has been shopping in La Rochelle preparing for the return trip apparently. pic.twitter.com/T1ddwCgwzw

He has caused thousands of pounds worth of damage to boats in St Mary’s harbour and caused similar chaos when he capsized a dinghy off the Welsh town of Pembrokeshire trying to get aboard.

Officials on the Isles of Scilly have recently built a pontoon for the marine mammal to relax and have a ‘safe space’.

However, experts who are monitoring him have said he is most likely suffering in the boiling heat and have advised the public to keep their distance.

A spokesperson for Cornwall Seal Group Research Trust said: “This heat is not something he is adapted for so it’s more important now more than ever to give him rest and space. The hot weather is challenging him.

“We’d like to stress the key message that Wally needs rest and space.

“All boat owners and water users have been asked to give the walrus space and refrain from actively moving towards him, but the temptation has proved too strong for many.

“The walrus is a highly protected species and disturbance of this nature is a criminal offence. Even a lift of the head means his rest has been interrupted. Please stay away from him.”

Experts have also said that the pontoon will not stop Wally from eventually moving away from the Isles of Scilly when he is ready and has enough energy, according to Metro.